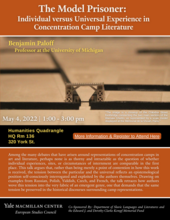 The Yale European Studies Council of the MacMillan Center presents Benjamin Paloff, Professor at the University of Michigan, on “The Model Prisoner: Individual versus Universal Experience in Concentration Camp Literature”
Location: HQ (Humanities Quadrangle), Rm 136, 320 York St.
Register to attend: https://bit.ly/YaleESC-EventRegistration
Among the many debates that have arisen around representations of concentration camps in art and literature, perhaps none is as thorny and intractable as the question of whether individual experiences, sites, or circumstances of internment are comparable in the first place. This talk argues that, rather than being merely a point of contention in how this work is received, the tension between the particular and the universal reflects an epistemological position self-consciously interrogated and exploited by the authors themselves. Drawing on examples from Russian, Polish, Yiddish, Czech, and French, the talk retraces how authors wove this tension into the very fabric of an emergent genre, one that demands that the same tension be preserved in the historical discourses surrounding camp representations.
About the Speaker:
Benjamin Paloff is Professor of Slavic Languages and Literatures and of Comparative Literature at the University of Michigan, where he also directs the Center for Russian, East European, and Eurasian Studies. He is the author of Lost in the Shadow of the Word (Space, Time, and Freedom in Interwar Eastern Europe) (Northwestern University Press, 2016), which was named 2018 Best Book in Literary Studies by the American Association of Teachers of Slavic and East European Languages, and of two poetry collections, And His Orchestra (2015) and The Politics (2011), both published by Carnegie Mellon University Press. He has translated about a dozen books and many shorter literary and theoretical texts from Polish, Czech, Russian, and Yiddish, notably works Dorota Masłowska, Marek Bieńczyk, Richard Weiner, and Yuri Lotman, and he has received grants and fellowships from the Michigan Society of Fellows (2007-2010), Poland’s Book Institute (2010), the Stanford Humanities Center (2013), and the National Endowment for the Arts (2009, 2016). His research focuses on philosophical dilemmas, particularly in metaphysics and the ethics of representation, in modern Central and Eastern European literature, as well as on translation theory and practice.
Sponsored By: The Edward J. and Dorothy Clarke Kempf Memorial Fund; the Department of Slavic Languages and Literatures; and the Yale MacMillan Center’s European Studies Council, and the Program in Russian, East European, and Eurasian Studies (REEES)