In-Person Program: Testify—in Court or on Film: From Nuremberg to the Paris Attacks of November 13, 2015 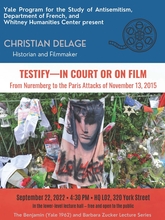 The Benjamin (Yale 1962) and Barbara Zucker Lecture Series
Where is the best place for victims of extreme violence to testify? In a courtroom or in the more private setting of a filmed interview? After working on the films of the historical Nuremberg trials, I have gone on to film survivors of the Shoah, as well as those who have curated the great collections of survivor testimonies, particularly at Yale, along with about twenty survivors and witnesses (doctors, firefighters, neighbors) of the November 13, 2015 terrorist attacks in Paris. In this presentation, I will also show an excerpt from my latest film, 13 November: Their Lives Were Never Ordinary.