The Politics of Diversity: Perspectives from REEES | Alexandra Schwell 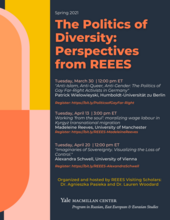 The third talk in the series, “The Politics of Diversity: Perspectives from REEES” features Alexandra Schwell, Professor of Empirical Cultural Studies, University of Klagenfurt. She will present on “Imaginaries of Sovereignty. Visualizing the Loss of Control.”

Register for virtual event: http://bit.ly/REEES-AlexandraSchwell
“The night that Germany lost control.” This headline on the cover of the German weekly DIE ZEIT was published in fall 2016 on the 2015 border opening anniver- sary when German chancellor Angela Merkel had decided to allow Syrian and other refugees into the country. DIE ZEIT situates its visual and linguistic narrative wit- hin a discursive framework that echoes far-right and right-wing populist discourses in the way it instrumentalizes images, metaphors, and visual imaginaries of Others and relates them to imaginations of control and sovereignty. The paper seeks to elaborate on the broader relation of images, imaginaries, and emotional practices of border transgression and the invocation of the border in media and political discourse on refugees in Germany. It explores how the cover epitomizes, alludes to, and at the same time fosters a growing unease of large parts of the German liberal middle-class concerning the “refugee crisis”.
Dr. Alexandra Schwell is a professor of empirical cultural analysis at the University of Klagenfurt, Austria. Research interests include the anthropology of the political, popular culture, border studies, ethnographic methods, and Europeanization processes. She is co-convenor of the EASA Anthropology of Security Network and co-editor-in-chief of Ethnologia Europaea.