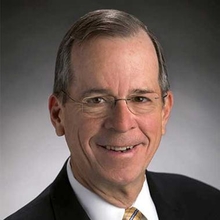 *Please note that this event has been postponed*
International Security Studies will host a special Discussion Forum with Admiral Michael Mullen, former Chairman of the Joint Chiefs of Staff, co-sponsored by the Whitney and Betty MacMillan Center for International and Area Studies at Yale.
Admiral Mullen served as the 28th Chief of Naval Operations from 2005-2007 and as the 17th Chairman of the US Joint Chiefs of Staff for Presidents Bush and Obama from 2007 to 2011. He led the military during a critical time of change and transition, overseeing the end of the combat mission in Iraq and the development and implementation of a new military strategy in Afghanistan.
Admiral Mullen advanced the rapid fielding of innovative technologies, championed emerging and enduring global partnerships, and promoted new methods for countering terrorism. He spearheaded the elimination of the “Don’t Ask, Don’t Tell” policy, ushering for the first time in US military history the open service of gay and lesbian men and women.
Admiral Mullen is a Distinguished Graduate of the US Naval Academy and a Distinguished Graduate of the Naval Postgraduate School, a Distinguished Alumni of Harvard Business School, a Member of the National Academy of Engineering and serves as a Trustee at Caltech. Since his retirement from the United States Navy in 2011 after 43 years of honorable service, Admiral Mullen joined the corporate boards of General Motors from 2013-2018 and Sprint from 2013-2019. He continues to serve on numerous boards to includeBloomberg Philanthropies, CALTECH, Naval Academy Foundation, Naval Postgraduate School Foundation, Harvard Business School and a wide array of non-profit organizations dedicated to improving the growth, development, recovery, and transition of military veterans and their families.
Additionally, he taught National Security Decision-Making and Policy at the Woodrow Wilson School of International and Public Affairs at Princeton University from 2012-2018 and continues to teach advanced ethics and leadership at the US Naval Academy.
This event is being held in person and will be simulcast via Zoom Webinar. In-person attendance is open to members of the Yale campus community with Yale ID. All may attend via Zoom.