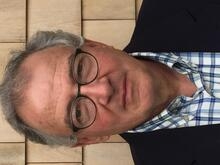 Sculptors during the Kamakura period at times looked to unconventional sources for their images in other projects. One of the most noteworthy instances of this practice occurred in 1256 when the sculptor Kaijō carved statues of Aizen Myōō and Jizō from wood from the pillars of the Great Buddha Hall at Tōdaiji that had burned in 1180. When preparing to carve the statues Kaijō and his patron, the monk Jakuchō, consecrated the wood, and then Kaijō and his assistants maintained the Eight Pure Precepts while sculpting the images. Through the use of repurposed wood from structures with potent connections to Japan’s religious history, the installation of dedicatory objects, and their own personal devotions, Kaijō and other sculptors of the period embedded their works into multiple networks of meaning that reenforced the spiritual authority of their statues in ways that went far beyond their immediate visual impact.
Samuel C. Morse is the Howard M. and Martha P. Mitchell Professor in the Department of Art and the History of Art and chair of the Department of Asian Languages and Civilizations at Amherst College. For the 2015-2016 academic year he was the Edwin O. Reischauer Visiting Professor at Harvard University. He is presently a panelist for the U.S.-Japan Conference on Cultural and Educational Interchange (CULCON) and a commissioner for the Japan-U.S. Friendship Commission. He is the co-author of Object as Insight: Japanese Buddhist Art and Ritual, and author and editor of Reinventing Tokyo: Japan’s Largest City in the Artistic Imagination, as well as numerous articles on Japanese religious art. His research and teaching focus on Buddhist art from the Nara through Kamakura periods; chanoyu; and art in the modern city.