Contested bodies: Race and pregnancy, past and present 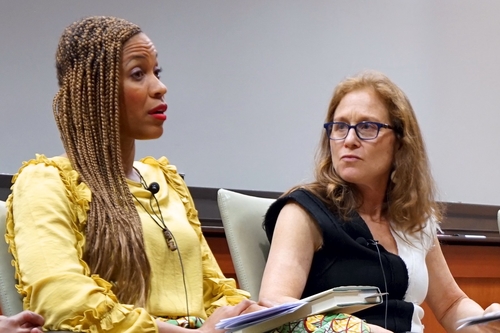 The Gilder Lehrman Center for the Study of Slavery, Resistance, and Abolition hosted a panel discussion on how legacies of slavery continue to impact racism and implicit bias in medicine today. Using Professor Sasha Turner’s book, Contested Bodies: Pregnancy, Childrearing, and Slavery in Jamaica (University of Pennsylvania Press, 2017) as a starting point, panelists reflected on the long history of imposed regulations on Black women’s reproductive lives. The program was co-sponsored by the Program for Humanities in Medicine at the Yale School of Medicine and by the Yale School of Nursing. It was hosted by the Yale School of Public Health. (view discussion)

Turner discussed her inspiration for writing Contested Bodies, citing her fascination with the emphasis on protecting enslaved women’s pregnancy in Jamaica. In the book, she argues that thirty years before the end of the slave trade in 1807, slaveholders and doctors carefully adjusted enslaved women’s labor, discipline, and health care to ensure the survival of infants.

She noted that protecting pregnancy was sparked in part by “pro-natal abolitionist” activism in England. In her research, Turner uncovered “elaborate arguments that abolitionists were making around the need to encourage the biological reproduction of slaves in the colonies” as a way of ending not slavery itself but rather the TransAtlantic trade of captives from Africa to the West Indies. She explained that protecting pregnancy was viewed as a way to end the slave trade without causing economic downfall of the plantation system.

When asked whether enslaved women gained agency over their bodies due to increased value placed on pregnancy, Turner responded that women “understood the conversations that were going on in England. They understood the new demands that were placed on their bodies, both in terms of their labor on the plantation and their labor as reproducers of the labor force.” In the face of this, she argued, women continually struggled to maintain as much control as possible over their reproductive lives.

Roberts then discussed her research into the slave trade in West Africa, noting that those who were enslaved were subject to medical evaluations of their body with “no sense of humanity.” She observed that, ironically, those who were shipped to Jamaica may have felt they gained a certain amount of autonomy compared to their brutal and invasive treatment in the slave-trading forts in West Africa.

Connecting past with present, James-Conterelli examined the existing legacy on Black women’s reproductive health. Citing inequalities in maternal health and childbirth outcomes, she stated that not much has changed in terms of how society imposes its views on women’s reproductive health. “It saddens me that you read a book, and bring it forward to 2019, and see such parallel in our healthcare,” she said.

Turner then gave more historical background about the medical professionals who treated the laborers. Around the 1780s, plantations shifted from relying heavily on enslaved healers to European doctors. Noting that very few doctors wanted to go to the colonies, she stated that most doctors on plantations primarily focused on their own research and studying new medical treatments. These doctor-scientists frequently treated the bodies of enslaved peoples as sites of pharmaceutical and medical experimentation.

She went on to discuss how punishments were altered to protect pregnancies. She argued, “the intention was not to remove punishment but to make punishment so effective that you cajole the women but protect their body.”

Regarding breastfeeding, Turner noted that plantation owners, doctors, and abolitionists all proposed shortening of the mother’s lactation period for slightly different reasons. Slaveholders did not want children to become too attached to their mothers, and doctors hypothesized that breastfeeding was a natural contraceptive and would slow reproductive rates. In addition to these arguments, abolitionists believed that “children were the future of the colonies” and as such were best separated from their enslaved mothers. Turner said of the abolitionists, “they were hoping that at some distance point in the future, those children would be able to be acculturated to British cultural values and British cultural norms.”

James-Conterelli viewed the abolitionists’ treatment of enslaved people as a mechanism through which “racism between people of color” developed. She described how the legacy of intra-racial hierarchy (e.g., mixed children of slaveholders being seen as better than their darker counterparts) exists to this day.

Audience members were drawn largely from Yale’s School of Nursing, School of Medicine, and School of Public Health, as well as from the New Haven-area community at large. During the question and discussion period, many members of the audience shared their concerns about the continuation of precarious conditions during pregnancy and childbirth for Black women and women of color generally in the United States. Widespread agreement was expressed for respecting cultural traditions and supporting community engagement with the birthing and raising of children, rather than leaving women, children, and families in social isolation. Panelists and audience members alike also argued strongly for the need to understand the histories of slavery and its afterlives in order to effectively confront the often-lethal consequences of racism that persists in the contemporary world.