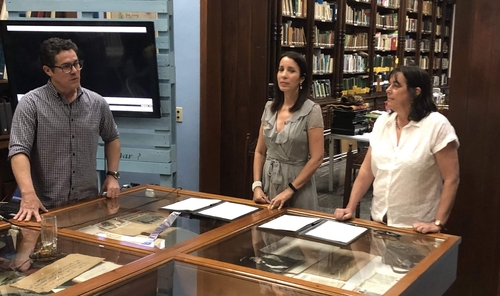 The Council on Latin American and Iberian Studies (CLAIS) at the MacMillan Center at Yale University and Fundación Antonio Núñez Jiménez (FANJ) in Cuba are delighted to announce a Memorandum of Understanding and partnership to work together to expand the Program in Cuban Studies at Yale.

FANJ has been a committed and dedicated partner for Cuban Studies at CLAIS since it was dedicated as a priority for the council in 2017. As part of the program, CLAIS organizes a number of activities to highlight Cuban history, culture, and society throughout the year, including featuring the country as part the CLAIS Film Series with films from Cuba and the CLAIS Program in Cuban Studies Speaker Series that invites researchers and scholars to campus to speak about issues related to Cuba. One of the significant parts of the program is an undergraduate course (History and Culture of Cuba) that included a two-week class trip to Cuba. (See overview of 2019 History and Culture of Cuba Trip)

“The signing of this memorandum formalizes not only the hope and excitement about joint scholarly work and academic collaborations, but it also signals our commitment to friendship and understanding between the two communities,” said Professor Claudia Valeggia, chair for CLAIS.

FANJ is a cultural and scientific non-governmental institution and it is dedicated to research and promotion of programs and projects for the protection of the environment as it relates to culture and society. The foundation works with many higher education institutions and organizations throughout the world to further its mission. FANJ primarily focuses on five areas: geohistorical research, patrimonial conservation and cultural services, sustainable localities, nature and community, and responsible consumption and economy.

The Council on Latin American and Iberian Studies (CLAIS) at the MacMillan Center at Yale seeks to enhance the understanding of Latin America, Spain and Portugal. The Council draws on the strengths of Yale’s pioneering departments of History, Political Science, Anthropology, and Spanish and Portuguese, among others, to offer a broad array of courses, cultural events, scholarly lectures, and academic research. CLAIS organizes several colloquia series, sponsors research abroad, coordinates outreach programs, convenes international conferences, and supports faculty activities and collaborations throughout Latin America and the Iberian Peninsula.