The Greek Revolution and the Greek Diaspora in North America 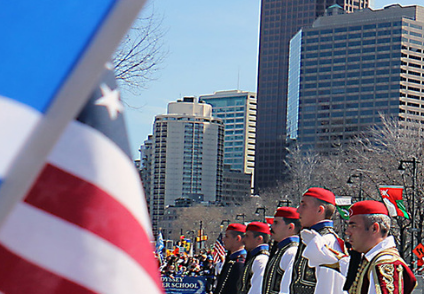 “The Greek Revolution and the Greek Diaspora in North America” was the title of the virtual conference honoring the bicentennial anniversary of the Greek Revolution, the struggle against the Ottoman Empire. It took place on Saturday, October 16, and was organized by Maria Kaliambou, Senior Lector at the Hellenic Studies Program at Yale University (View Videos).

The conference focused on the historical and cultural impact of the Greek Revolution for the Greeks in North America. It documented how North American Greek communities perceive and enliven this milestone of the modern Greek history. It also discussed its contemporary significance in the identity formation of those communities and the mechanisms by which they cultivate the memory of the revolution. Both historical and contemporary critical reflections about the expectations and assumptions diasporic Greeks foster about their history were presented. The Revolution is imprinted in every immigrant’s mind and serves as the foundational event of their collective identity. The conference examined a variety of discourses and practices as they pertain to the commemorative experiences of the Revolution in North America.

Distinguished scholars from several fields (history, sociology, literature, art history, film studies, folklore, anthropology, education) came into dialogue for a better understanding of the past and current importance of the Greek Revolution, its evolution, accommodations, and adaptations as these come to bear on the identity of the Greeks in Diaspora.

The conference was structured in three panels with three speakers in each panel. The first panel focused on the perception of the Revolution to specific communities and associations in the US and Canada. Alexander Kitroeff opened the conference with a talk entitled “AHEPA’s Commemorations of 1821”. Kitroeff analyzed the evolution of the celebrations of the Revolution by the largest Greek American community AHEPA (American Hellenic Educational Progressive Association). Kitroeff noted that “the trajectory of the commemorations shows us the evolution of AHEPA: Americanization in the 1920s and 1930s, involvement in politics in a kind of conservative mindset in the Nixon era, and now an organization which is very much playing a role of the transnational diaspora.” Kitroeff also mentioned that AHEPA took the initiative and celebrated the bicentennial in Athens in contrast to most other Greek American organizations.

Nick Alexiou’s presentation “Commemorating the Revolution in New York. A Historical Overview” focused on the evolution of the commemorations and the celebratory parade in the metropolis of New York. According to Alexiou “the New York City parade is the largest city parade outside of Greece. This is not surprising considering that the United States is home to one of the largest ethnically Greek populations outside of Greece and Cyprus. Annually the mast of the Empire State Building is lit in blue and white colors of the Greek flag”. Alexiou argues that “the parade gives Greek Americans (and Greece) visibility in American society. He concluded by asking the question on “how can the parade be enhanced to reflect history objectively and engage in a dynamic way the contemporary Greek Americans, who are Americans of ethnic descent.”

Athanasios Gekas with his talk “Perceptions of the Greek Revolution and the Greek Communities of Canada, 1920s-2021” gave an overview of the commemorations in Greek communities in Canada, focusing on the city of Toronto. He based his talk on Canadian newspapers, photographs, and articles since 1925, when Independence was first time celebrated in Montreal. Gekas illustrated how the parade evolved “from a ‘closed’ event in a theater that was reported in the local press as curiosity, to the mainstream parade in downtown Toronto in the 1950s, and to the parade in ‘Greektown’ since the late 1970s and the Greek community Gala performance and the flag-raising ceremony at the Ontario parliament.” He concluded by saying that on the bicentennial of the Revolution during the pandemic new digital media such as podcasts were implemented to satisfy both a local as well as global audience.

The second panel focused on the representations of the Revolution in literature, architecture, and film. Dan Georgakas spoke about Harry Mark Petrakis’s two novels about the Greek Revolution (The Hour of the Bell, and The Shepherds of Shadows). According to Georgakas these novels “are some of his finest writings” and the second book includes one of the most beautiful passages about Lord Byron. Georgakas noted that Petrakis’s novels are unique for the Greek American literature and for American literature as well. Petrakis “wanted to make a book as big and complete as War and Peace.” Georgakas also shared with the audience his personal experience interviewing and talking with Harry Mark Petrakis back in 1976.

Kostis Kourelis’s talk entitled “Architecture, Abolition, Revolution: A Greek American Revival (1920s) of the American Greek Revival (1820s)” eloquently demonstrated how the ideologies about the revolution influenced the architectural heritage of Americans and Greek Americans. Kourelis presented the Greek revival movement in the United States, which “was the first national style of American architecture dating from 1810 to 1840.” Kourelis noted that “one hundred years later Greek American communities revived that movement by appropriating older American buildings for their churches.” Later in the 1960s a neo-byzantine style was endorsed by the Archbishop Iakovos for the Greek churches in America. According to Kourelis, “the ideological radiance of the suburban neo-byzantinism of the 1960s has eclipsed a much more nuanced urban architecture of the 1910s”.

April Kalogeropoulos Householder’s talk with the title “Reflections on Greek Nationalism and the Making of a Documentary Film about Bouboulina” started with an autobiographical note. Kalogeropoulos Householder mentioned that on her personal journey to connect with her Greek roots she discovered Laskarina Bouboulina, heroine of the Greek Revolution. “As a feminist, a Greek and a researcher [Kalogeropoulos] felt a calling to make her story known to the wider audience” and she created a documentary film about Bouboulina’s life. “The film is part of a Greek American diaspora community remembrance project that aims to celebrate important historical women of Greece by telling their stories”. The speaker applied feminist critique to understand Bouboulina’s participation in the war and leadership. At the end of her talk, Kalogeropoulos referred to the dangerous rhetoric of nationalism. She commented on the uses and abuses of the Revolution by Greek nationalists who use Bouboulina and the Greek Revolution to justify xenophobia.

The third panel opened with a talk by Maria Kaliambou with the title “Reviving the Revolution in Greek American Publications”. Kaliambou focused on three categories of books produced by Greeks in America: Poetry collections, drama productions, and schoolbooks for the elementary schools. Kaliambou found images of performances of the Revolution by adult community groups in New Haven, Connecticut, in the 1930s. Kaliambou argued that the common motif in all the above mentioned Greek American publications is that they include segmented moments of the Revolution, focus on heroic acts, emphasize self-sacrifice, and represent heroes with almost supernatural strength. In conclusion, Kaliambou noted that “the narratives have the tendency to exaggerate and oscillate between history and mythology.”

Fevronia Soumakis’s talk “Celebrating the 1971 Greek Independence Day Jubilee through Greek Orthodox Schools in the United States” offered a historical analysis of the ways in which Greek Orthodox schools under the purview of the Greek Orthodox Archdiocese of North and South America commemorated the 150-year anniversary of Greek independence, while Greece was ruled by a military dictatorship. This anniversary “amplified nationalism, religiosity, and the notion of uninterrupted historical continuity”. Soumakis concluded that the department of Education “missed the opportunity to make authentic claims regarding freedom and democracy but instead reflected an accommodationist stance through their use of those symbols in their materials.”

The last presentation by Yiorgos Anagnostou entitled “The Bicentenary across Greece and the Diaspora: Toward the Making of a Global Greek Civic Identity” placed the Greek bicentenary in relation to Greece and two major diasporas––Greek Australia and Greek America––in the interest of exploring emerging expressions of identity across global Greek worlds. Anagnostou explored a corpus of narratives to show their commonality “in a cohesive civic narrative.” Anagnostou raises the ethical question “how to commemorate an event significant for a people in a place associated with other people’s plight?” He concludes “who the Greeks are as a people is intimately interwoven with how they position themselves in relation to structures of inequality and exclusion in their home countries.” Anagnostou challenges us to examine our civic obligation “in connections with questions of governance and institutional activism.”

People from all over the United States, Canada, Greece, Cyprus, Germany, England, Italy, Romania, United Kingdom, even Australia attended the conference. The stimulating discussions will lead to further research. The elaborated and expanded essays of the conference will be published in an edited volume.

The conference was sponsored by the MacMillan Center’s Hellenic Studies Program and European Studies Council, and the Modern Greek Studies Association through its Innovative Initiative Grant. Additional funding was provided by the Edward J. and Dorothy Clarke Kempf Memorial Fund.