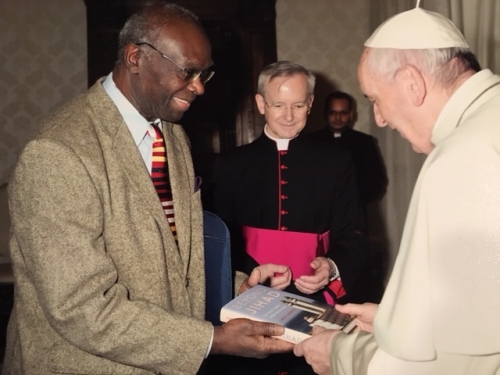 Professor Lamin Sanneh, D. Willis James Professor of Missions and World Christianity and Director of the Project on Religious Freedom and Society in Africa at the MacMillan Center, presents his latest publication, Beyond Jihad: The Pacifist Tradition in West African, to Pope Francis at the meeting of the Pontifical Commission on Religious Relations with Muslims at the Vatican on February 9, 2017.

In the book, Professor Sanneh examines the origin and evolution of Muslim African pacifist tradition and focuses on the ways in which Islam spread and took hold apart from jihad. He argues that Islam was successful in Africa not because of military might but because it was adapted by Africans themselves.

Read “Beyond Jihad”: A conversation with Lamin Sanneh