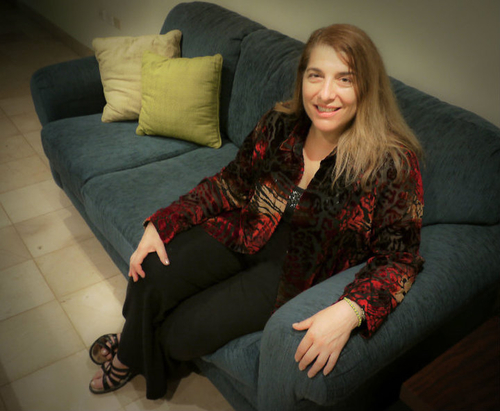 One of Margherita Tortora’s passions is watching Latin American films. She has always incorporated them into her classes at Yale, where she is a Senior Lector II in Spanish and Portuguese. Not only do her students get additional language instruction by watching them, they also learn about the various countries’ cultures by doing so. Margherita teaches a course on Latin American films and has been running a film series for the Council on Latin American and Iberian Studies (CLAIS) at the MacMillan Center for more than two decades that features visits from filmmakers. This November 9-15, she will present the sixth year of the Latino and Iberian Film Festival at Yale (LIFFY). Of course, it will be a little different this year due to the Covid-19 pandemic because all the films will be online.   Click here to view the 2020 Program and register for films.  Watch the 2020 LIFFY trailer.

Margherita talks about this year’s festival in the following interview:

Every LIFFY has a theme and this year it’s “Bringing Diversity, Truth, and Justice into Focus.” Why did you choose it?

With the pandemic raging around the world, coupled with the divisiveness taking place along with it, this year’s theme is an especially important reminder during our times. We need to look for the light and the truth (lux et veritas) and support diversity because in this country right now, it seems like divisiveness is reigning. In this festival we want people to see real films that are going on in many areas of the Spanish and Portuguese speaking world. We want to show the great diversity, beauty and truth of things that are happening. We want our spectators to achieve 20/20 focus regarding our Spanish and Portuguese speaking neighbors.

This is the 11th year of the festival and the 6th year as LIFFY at Yale. How did it all begin?

Some friends of mine were running a film festival in Providence, Rhode Island, and while I was helping them, we came up with the idea of holding one in both Providence and in New Haven, where I was living and working at Yale. So, we started the New England Festival of Ibero American Cinema in 2010 as a nonprofit and it was a success. Yale was kind enough to let me use some of its film spaces, like the Whitney Humanities Center, to screen the films. Then CLAIS at the MacMillan Center became a supporter and we used the auditorium in its building, too. My friend who worked at Brown ended up moving away and the others also lived far away, so I brought the whole thing to Yale, renamed it the Latino and Iberian Film Festival at Yale, now known as LIFFY, and have been running it with the help of CLAIS for the past six years. I especially thank Professor Claudia Valeggia (Chair of CLAIS), Asia Neupane, Daniel Juárez and Marilyn Wilkes for their invaluable support!

How do you get the films?

I do a call for them. They have to be films that are not more than three years old and they must have English subtitles. I’ve received more than 300 films for this year’s festival from Mexico, Puerto Rico, Cuba, Guatemala, Colombia, Peru, Ecuador, Argentina, Chile, Brazil, the Dominican Republic, Venezuela, the USA, Portugal and Spain for the three categories of feature films, documentary features, and short films. We will be screening about 60 films.

Do you watch them all?

I do watch them all but I also have some help. We have a selection committee that views all of the films. I especially wish to thank Tony Sudol and Rosario Caicedo for their help.

Give us a highlight of some of the films that we can expect to see.

We have several films that deal with gender roles and some have themes revolving around being transgender people or homosexual people. Gender tends to be an important ongoing theme throughout the films we present. We also have films that have to do with immigration, and we have some beautiful Cuban shorts that showcase everyday life. For example, one of the short films, “El artesano” (The Artisan) is about a widower who loses his wife, with whom he was very much in love. He doesn’t want to function anymore, and doesn’t want to go visit her grave. This takes place in the small town of Gibara, Cuba. Eventually, with the help of his friends, he goes and talks to his dead wife at her grave site. It’s a very touching human kind of film. Our closing night film from Argentina, El Encanto, is a similarly very human story of a young couple, and the man’s conflicting ideas about becoming a father. Others are more polemical. We have a whole group of films about the coronavirus and how it’s affected life in their respective countries. So, this kind of film is very new.  I believe that there is something for everyone!

How can people see these films?

Due to ongoing health concerns related to the COVID-19 pandemic, this year’s festival will be presented virtually. All films and discussions will be streamed online from November 9th through November 15. We will be opening the festival with La otra Penélope (The Other Penelope) by Bladimir Abud from the Dominican Republic. It is based on an important Dominican novel, and is about the resistance movement during the early years of the Balaguer dictatorship.  There will be a Q&A with the filmmaker following the presentation. People can visit the website at liffy.yale.edu to see the film schedule and register for the films they’d like to watch.  We also have a Facebook page, facebook.com/liffyyale

In previous years, you have done Q&As with some of the filmmakers after a several of the screenings. Will you be able to do that this year since LIFFY will take place online?

Yes, we will be having discussions with the filmmakers. For me, that is a very important part of the LIFFY experience. It’s one thing to watch a film but a whole other thing to hear about all of the backstory of the film, right from the person who’s made the film. It just makes the film come to life so much more.

You also judge the films in each category. Who will be a part of the jury this year?

We have an incredible jury this year. We have one of the most renowned Latin American filmmakers. His name is Víctor Gaviria . He’s from Colombia and became famous with his films, Rodrigo D: No futuro and La vendedora de rosas (The Rose Vendor). We also have Cynthia Sabat, who is a filmmaker, producer, and well-known film critic from Buenos Aires, Argentina. Joining us from Guatemala is the talented producer, Bea Gallardo.  She has a long history working with many filmmakers both inside and outside of Guatemala.

The jury will judge the films for the three main categories—best feature fiction film, best feature documentary film, and best short film. The jury also may choose to include sub-categories, some honorable mentions, and best actor, best actress.

Will you offer any workshops as part of LIFFY?

We will be offering several workshops.  Two will be in Spanish: young filmmakers from Ecuador will discuss the challenge making films during the Covid-19 pandemic; and we will have a “Meet the Jury” workshop where our jurors will discuss their experience in the world of Latin American Cinema. We also plan to have a bilingual workshop with women filmmakers and producers, as well as several bilingual Q&As.

New Haven has such a large Latino community. Are they involved in LIFFY?

Yes, I think this is a really wonderful thing to share with the New Haven community and we try to involve all of New Haven, and particularly the Latino community. We have a tradition of inviting students from public schools to a special film screening. This year the film will be Los Súper from the Dominican Republic, which is a story about three people from a very poor neighborhood who become super heroes in order to rid their neighborhood of crime. I’m working with the school system and Arte, Inc. to see how we can best bring the film to the students since they can’t come to the theater this year. We also collaborate with several New Haven restaurants, like Soul de Cuba. This year it’s a little harder to do that because of Covid-19.

This interview was conducted and edited by Marilyn Wilkes for the MacMillan Center.