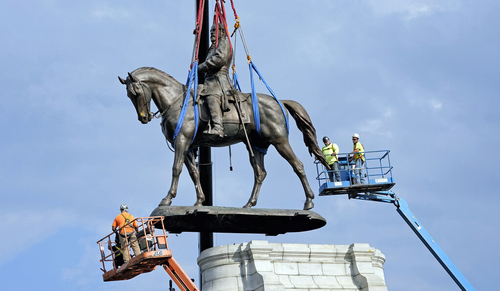 Yale historian David Blight visited Richmond, Virginia, often in the late 1990s while researching the Civil War’s effect on American memory. When not sifting through archives, he’d jog along the city’s famed Monument Avenue, named for the five grandiose memorials to Confederate leaders that adorned the tree-lined boulevard and grassy mall.

At the time, Blight couldn’t imagine that those monuments would ever come down.

“It was unthinkable,” he said. “This was the most important shrine to the Confederacy right in the heart of Richmond, the former Confederate capital.”

More than 20 years later, Blight had a role in the legal battle that paved the way to removing the last and most prominent of the avenue’s Confederate monuments: a towering equestrian statue of rebel general and slaveowner Robert E. Lee.

Virginia Gov. Ralph Northam’s legal team invited Blight, Sterling Professor of History at Yale and Pulitzer-Prize winning author of “Frederick Douglass: Prophet of Freedom,” and his colleague Gaines Foster of Louisiana State University, to submit an amicus brief to the state’s supreme court supporting the governor’s decision to remove the monument to Lee, a man who declined Abraham Lincoln’s offer to appoint him major general, resigned his commission in the U.S. Army, and led the Army of Northern Virginia in many of the Civil War’s bloodiest battles.

The historians helped the governor’s lawyers draft the brief, which puts the monument’s origins in historical context, relying on the work of Blight, Foster, and several of their colleagues to demonstrate that the statue was erected in 1890 to celebrate the defeat of Reconstruction and the redemption of white supremacy in the South. The brief augmented testimony delivered in a court hearing by historians Edward Ayers of the University of Richmond and Kevin Gaines of the University of Virginia.

In a unanimous Sept. 2 ruling affirming the governor’s decision, the court cited the historians’ arguments that the monument honored the “Lost Cause” of the Confederacy — the myth that the rebel states had noble aims not centered on preserving slavery — and symbolized racial injustice.

On Sept. 8, the 21-foot bronze statue was lifted from its nearly 40-foot granite pedestal. It was buzz-sawed in two at the rebel commander’s waist so it could clear highway overpasses as it was hauled to an undisclosed state-owned facility where it awaits a decision on its future, the Associated Press reported.

The amicus brief draws on Blight’s 2001 book, “Race and Reunion: The Civil War in American Memory” — which he was researching during those visits to Richmond in the 1990s — to describe the motivations of those who commissioned and raised the statue in 1890 as Jim Crow was tightening its grip on Virginia and the South. It argued that removing the statue was not an act of historical erasure.

“To the contrary, it would be part of a broader reckoning with historical truth that has led many institutions to rethink Confederate displays,” the brief stated. “Lee and other Confederate leaders knowingly betrayed their country to preserve the institution of slavery and its systematic subjugation of Black Americans. Denying that truth while reasserting control over those whom the Confederacy sought to enslave was the essential goal of the Lost Cause movement.”

The brief points out that in the Civil War’s immediate aftermath, memorials in the South focused on grieving the fallen soldiers — nearly a fifth of all white military-aged southern males died in the conflict. Those monuments tended to be somber, understated, and located in cemeteries, according to the brief.

“The Lee statue on Monument Avenue bears no resemblance to these early war memorials,” the brief stated.

By the time the Lee monument was erected, white southerners had fully embraced the “Lost Cause” myth, which they celebrated with dramatic memorials on city squares and town greens in “a stunningly successful effort to remake the public’s memory of the Confederacy and its leaders,” the brief notes.

“It was the white South saying, ‘You think we lost that war? Well, we won Reconstruction,’” said Blight, director of the Gilder Lehrman Center for the Study of Slavery, Resistance, and Abolition at Yale’s MacMillan Center for International and Area Studies. “The unveiling drew massive crowds — 150,000 people, more than Richmond’s population. All cultural movements need a saint-like figure and they found theirs in Robert E. Lee. He was the model southern gentleman and a fierce warrior. He fit the bill.”

The brief offered details that shed light on the intentions of those who oversaw the monument’s creation, such as their insistence that the Lee memorial be taller than an equestrian statue of George Washington in Richmond’s Capitol Square.

With the statue’s removal, Monument Avenue is now bereft of Confederate memorials. The other four — monuments to Jefferson Davis, Stonewall Jackson, J.E.B Stuart, and mariner Matthew Fontaine Maury — were removed from their pedestals by the city last summer amid nationwide unrest over police brutality and racial injustice. Removing the Lee statue required the governor’s approval as it was located on state property. Private citizens filed two lawsuits disputing the decision. The state’s highest court ruled for the governor in both cases.

The boulevard’s lone remaining monument is a memorial to Arthur Ashe, the tennis champion, civil rights advocate, and Richmond native, which was erected in 1996.

To Blight, the Lee statue’s removal is the latest in a sequence of events that began in June 2015 after nine Black Americans were massacred during a Bible study by a white gunman at the Emanuel African Methodist Episcopal Church in Charleston, South Carolina. In the wake of the murders, the state’s legislators voted to remove the rebel battle flag from the State Capitol grounds with muted opposition from those who often vigorously defend the public display of Confederate imagery. In 2017, the deadly Unite the Right rally in Charlottesville, Virginia — ostensibly organized to protest the planned removal of a Lee statue in the city’s former Lee Park — further intensified criticism of Confederate memorials, he said.

“What happens from here is hard to say,” he said. “This is not over. There are thousands of Confederate monuments in the South. There are more of these fights to come.”

For his part, Blight appreciated the opportunity to participate in the amicus brief.

“It was a reminder of why I do this work,” he said. “When you write about race, slavery, and public memory — an inherently public issue — it puts you at the center of many controversies that divide us. The field couldn’t have more resonance. I’m lucky to be a part of it.”