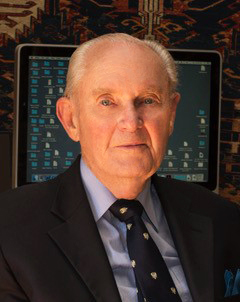 As part of the Henry L. Stimson Lectures on World Affairs, foreign policy consultant William R. Polk gave a series of three talks under the theme “America Confronts the Post-Imperial World.” Polk is a former Professor of Middle Eastern history and politics at Harvard and the University of Chicago, as well as a prolific author, with numerous books on Middle Eastern diplomacy. He was one of three members of the crisis management committee during the Cuban Missile crisis and served on the State Department’s Policy Planning Council. Hosted by the MacMillan Center, the lecture series sought to explore America’s changing role in the world.

In the first lecture, called “Snow White’s Mirror: What We See and What Others See,” Polk investigated the nature of the American character—how Americans came to see themselves as they do and the impact this has had on U.S. foreign affairs. (view video) He explored this question by starting at the very beginning of the American experience. Starting from colonial times, both violence and altruism shaped the American character. Polk pointed to the establishment of the “City upon a Hill,” noting that the colonists “were both establishing a new commonwealth where they believed they were doing good, and where they were involved in taking the land away from the people who were there.” He went on to describe the horrors of the Native American “cultural genocide,” a “systematic process” that lasted for centuries after the first colonists landed in America.

Polk noted that this disgraceful history was quickly forgotten, revived only by “America’s greatest university—the movies.” This revival, however, is not a direct portrayal of what occurred in history, but a reinterpretation. Polk recalled playing “Cowboys and Indians” in his childhood, and how no one wanted to be an Indian because—even in games—the Indians always lost.

When we look into Snow White’s mirror, Polk said, “we see ourselves.” He continued to describe how Americans see themselves as hoping to “seek peace and well-being for all people, help uplift them from poverty…topple tyrannies, spread democracy, and uphold the rule of law.” When others do not see what Americans see in the mirror, Americans dismiss them as “myopic, jealous, or simply hateful.” He noted that it has been disturbing to some that there is an increasing number of people who fail to see the image that we see.

Polk named America’s occupation of the Philippines as an example of when American self-perception did not reflect reality. Despite first intending to free the Philippines from their Spanish colonizers, President McKinley could not overcome his desire to own the Philippines. He bought the Philippines—and by extension the Filipinos—from Spain, instigating decades of violence. Polk compared the fighting between Filipinos and Americans to the “wars of extermination” against the Native Americans, noting that waterboarding was first invented during this time. To many, America’s interference was neither necessary nor welcome. However, “in our eyes, bringing law and order, reorganizing society, creating government, and hopefully uplifting the people… were a necessary component of America’s role in helping out the world.”

“War has always been a fundamental feature of our national culture,” Polk said. Again and again, America has used war to not only expand geographically, but to grow politically and socially. He compared the machinery of war to that of a pistol. “Firing it is sometimes forced upon us, but even kept in the holster, it can be used by ambitious leaders to control our way of life.”

Polk expands on America’s military mindset in his second lecture, called “How, from Our Earliest Days, We Have Been Beset by Fear of Violence and Have Increasingly Put Our Faith in Military Force.” (view video) Noting that Americans have become less and less educated about the Constitution, he began the lecture by discussing the origins of the American Constitution and the spirit in which it was written.

Though the colonists won the American Revolutionary War, “in the peace that followed, America was what we would call today a failed state.” We see examples of failed states in the daily newspapers, as people emerging from revolution “feel a nostalgia for their former regimes” and ultimately lapse back into it. Post-revolutionary America hovered on the brink of a similar chaos, Polk said. “The mood was one of confusion, dejection, and anarchy.”

To address the failure of the Articles of Confederation in ensuring domestic peace and tranquility, the Constitutional Convention of 1787 was held. Polk described how the real intention was not to merely amend, but to completely establish a new government, which “amounted to a coup d’etat.” During the Convention, though the delegates “wanted political power to be within the people,” they also wanted to save the people from their own worst enemy—themselves.

Polk noted that the delegates desperately worried about the balance between the central government and the military. He read a transcript of the discussion between the delegates when they were deciding between the word “declare” or “make” war. They ultimately decided that Congress has the power to “declare” war and limited the power of the president to only that of carrying out a war first declared by Congress.

The Congressional power to declare war has since been challenged, Polk said. In the nineteenth century, John Marshall introduced the idea of the President as the “sole organ,” a doctrine that is used today to give presidents ultimate authority in foreign relations and national security issues. In the twentieth century, Supreme Court Justice George Sutherland advocated that the president should be given a “free” and “strong” hand. Polk sees Sutherland’s actions as a violation of the Constitution, calling the increased presidential powers “one of the worst abuses of our time.” The expansion of presidential powers through legislation, such as the War Powers Resolution and Public Law 107-242 under President Bush, “have profound effects on our lives today.”

In his third and final lecture, Polk sought to address how Americans have responded to perceived threats to U.S. security since the Second World War, in a talk titled “Is Our Quest for Affordable World Security Feasible and What Can We Do To Make It More Likely?” (view video)

Polk started off by describing the common sentiment that U.S. security has been declining for the past half century. Despite attempts to limit war, such as the prohibition of biological and chemical weapons, efforts to limit weapons of war are often spearheaded by nations who do not possess those weapons.

He noted that the “apprehension of danger… shapes our lives today.” Polk noted that even when the apprehension of danger does not lead directly to war, it weakens the most precious and most fragile parts of our culture.” He named torture as an example, describing the impact that it has not only on victims, but the people to carry it out.

Polk criticized the way that powerful countries thought of smaller nations as “lifeless pieces on a chess board.” Churchill, for example, saw smaller countries as dominos. After the Second World War, “suddenly dominos became everyone’s favorite game.” It became a cornerstone of U.S. foreign policy, he said.

Today, “we’ve gone back… to the failed policies of the 1950s,” policies of the U.S. overwhelming societies in the third world and assassinating their leaders. He said, “our attempts to achieve security by violence and other means have not worked.”

Polk concluded with a warning: “Our attempts at security should not cloud our judgment.”