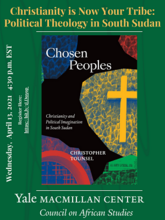 After two civil wars against predominantly Muslim Sudanese governments, South Sudan seceded to become the world’s newest nation on July 9, 2011. Within three years, however, the new nation was embroiled in an internal conflict drawn along ethnic lines. What became of the Christian liberation theology that supposedly reached its victorious conclusion with political sovereignty? In “Christianity is now your tribe”, Christopher Tounsel explores the ways in which South Sudanese have infused theology into their political thought and rhetoric in the post-independence era.