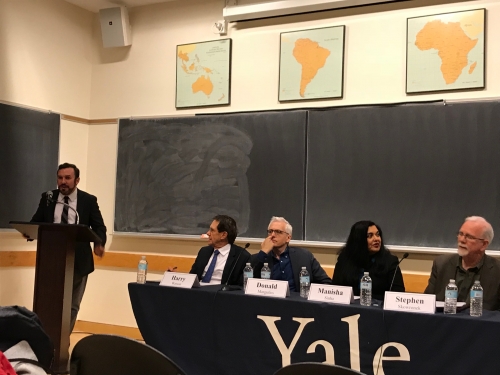 “Thanks to Trump, Jackson is in vogue again,” declared Manisha Sinha, Draper Chair in American History at the University of Connecticut, midway through a roundtable discussion of Andrew Jackson’s legacy during the “Andrew Jackson at 250: Race, Politics, and Culture in the Age of Jacksonian ‘Democracy’” conference, hosted by the Yale Center for the Study of Representative Institutions (YCRI) at the MacMillan Center on December 1 and 2. Twenty-three historians, political scientists, and a dramatist, along with members of the Yale and New Haven communities, joined Sinha for the two-day event, organized by YCRI Postdoctoral Associate Joshua Lynn, to “[reassess] the ‘Age of Jackson’ and Jacksonian ‘Democracy’” 250 years after Jackson’s birth in 1767.

Although Sinha and her fellow panelists admitted that Donald Trump’s presidency has revitalized public interest in Old Hickory, all of the scholars in attendance emphasized that Donald Trump is by no means Jackson. Sinha spent her entire presentation highlighting differences between the two administrations. She argued that while Jackson expanded the electorate during the 19th century, Trump and other Republican politicians are currently attempting to prevent large swaths of Americans from being able to vote. She continued that today’s GOP, comprised largely of the wealthy one-percent, is antithetical to Jackson’s economic populism and to repeated attempts to do away with special privileges in the private sector. Finally, Sinha contended that “today’s Republican Party is reactionary” while Jacksonian Democrats “were revolutionary.” For Sinha, analyzing how Jackson and his contemporaries reconfigured American political and social systems as a whole is far more academically beneficial than establishing tenuous ties between Old Hickory and Donald Trump.

Sinha’s tone seemed similar to that of fellow roundtable participant, Pulitzer Prize winning dramatist and Yale faculty member Donald Margulies. Margulies, a critically acclaimed playwright, is currently adapting Jon Meacham’s 2008 biography of Andrew Jackson, American Lion, into a screenplay for an HBO television miniseries. While Margulies did make some comparisons between Trump and Jackson, he also shared Sinha’s resolve to avoid oversimplifying the two men. “I feel more than ever how important it is to tell this story,” Margulies said while reflecting on the misunderstanding surrounding how the Age of Jackson relates to the present.

Sinha’s sentiments, in fact, captured the tone of the conference, as most panelists addressed the ways in which Jackson affected “race, politics, and culture” in the United States on a structural level. Joining Sinha for the roundtable was Stephen Skowronek, Pelatiah Perit Professor of Political and Social Science at Yale, who examined how Jackson altered the role of the presidency. He asserted that Jackson’s legacy “is so ingrained we take it for granted” because Jackson “turned the presidency into a place of national leadership.” Although the Constitution had attempted to separate political leadership and the office of the president, according to Skowronek, Jackson “[fused] political mobilization with presidential power.” Skowronek noted that American society now expects presidents “to transform the polity” because of Jackson.

Other speakers focused more on race, gender, and inclusion during the early republic and antebellum eras than strictly Jacksonian politics. During the final panel of the weekend, titled “Slavery and Antislavery in the Age of Jackson,” Gunther Peck, Associate Professor of History at Duke University, presented his paper, “Labor Abolition and the Politics of White Victimhood, 1820-1840: Rethinking the History of Working-Class Racism.” Peck detailed how the labor abolition movement during the 19th century characterized members of the Northern working class as “white slaves,” and he maintained that this slave classification exemplifies white supremacy as “a formulation of white grievance, white victimhood, and white identity.” Ultimately, Peck connected this use of white supremacy during the Age of Jackson to rhetoric presently employed by Alt-Right leader Richard Spencer, which continues to portray whites as victims of oppression.

Emily Owens, Assistant Professor of History at Brown University, joined Peck on the same panel to discuss her research on “Making Violence Ordinary: Cultures of Sex and Domination in the Antebellum South.” The questions raised during Owens’s talk proved especially timely in light of the sexual assault accusations surfacing across the entertainment industry and political world. Owens focused on the case of Delphine, an enslaved woman from Saint Domingue who sued for freedom in New Orleans during the early 1800s. While the court case revolved around Delphine’s manumission, Owens dissected language in the court record that mentioned and seemingly normalized the sexual violence Delphine faced at the hands of her owner. Owens claimed that the court’s characterization of the abuse “can be better understood as jargon than thick description.” These findings prompted Owens to ask the audience, “Does the ordinariness of [sexual] violence change the nature of violence? Furthermore, she wondered, “Does the repetition of [sexual] violence make it normal to the person who experiences it?” In the current cultural climate in which violence is both ordinary and recurrent, Owens’s questions seemed disturbingly relevant.

Additionally, during the conference’s second panel, “‘Law and Order’ in the Age of Jackson,” Laura Edwards, Peabody Family Professor of History at Duke University, confronted how scholars continue to misunderstand the relationship between legal and political history in her piece, “The Hidden World of Governance in Jacksonian America and the Artificial Line Between Legal History and Political History.” Edwards argued that the “problems we’re not getting today [exist] because of our view of the past” and that, for too long, academics have separated legal and political history, which is both “problematic” and “ahistorical.” She encouraged the audience to understand that “law is about governance,” which is necessarily about “social relationships.” Approaching the end of her talk, Edwards implored listeners to reflect on the fact that the Jacksonian legal system was “simultaneously participatory and undemocratic.” While Edwards applied this characterization specifically to law during the Age of Jackson, her words seemed applicable to the present.

Other guests at the conference analyzed the economy during the Age of Jackson. In the first panel of the conference, titled “Political Economy and the Jacksonian State,” Ariel Ron, the Glenn M. Linden Assistant Professor of the U.S. Civil War Era at Southern Methodist University, examined the value of Northern hay to the antebellum economy in his work, “‘King Hay’: Nationalism, Energy History, and Economic Development in the Nineteenth-Century Northern United States.” Ron concluded that by 1850, “Northern hay was worth twice as much as Southern cotton” because of its crucial use as a “fuel” source for horses throughout the country. By investigating the economic importance of hay, Ron nuanced a historical narrative that traditionally focuses solely on internationally traded cotton. Moreover, Ron’s work confronted academics’ current obsession with globalization, instead positing that historians must scrutinize the domestic commodities of a country in order to properly comprehend its economy.

During the third panel, “Jacksonian Political Thought Revisited,” Robert Richard of the University of North Carolina at Chapel Hill also challenged conventional notions of the Jacksonian economy with his presentation, “Jacksonian Populism and the Bank Question.” Although historians typically depict Jacksonian Democrats as anti-bank and supporters of hard money policy, Richard countered that many Democrats demanded paper money and the creation of more state-owned banks. He highlighted the fact that Democrats’ economic principles revolved around eliminating special privileges for monied individuals while allowing more white men to develop their own businesses. Contrary to conventional historical interpretations, Democrats actually supported bank development, paper money, and government intervention in the economy so long as they provided equal opportunities to all white men.

On the same panel, Joshua Lynn addressed “Race and the Jacksonian Counter-Enlightenment” and suggested that Democrats’ commitment to democracy rather than white supremacy led to the party’s shift away from Enlightenment liberalism during the 1850s. The Enlightenment ideals the Democrats had clung to prior to the 1850s entailed  inalienable political rights for certain people. Lynn asserted that Democrats’ extreme dependence on notions of popular sovereignty during the decade before the Civil War undermined their Enlightenment liberalism by allowing people to vote to determine others’ rights. According to Lynn, 1850s Democrats destabilized notions of rights by assigning them to both individuals and to communities.

The fourth panel of the conference, “Jacksonian White Male Supremacy,” also reimagined the Age of Jackson. Laurel Clarke Shire, Associate Professor of History at Western University, presented “Sentimental Racism and Sympathetic Paternalism: Feeling like a Jacksonian American,” portraying the Jacksonian era as “a culture of sentiment” in which “sympathy reinforced unequal power relations.” Shire thus described Jackson’s adoption of a Native American orphan, an act past historians considered kindhearted, as paternalistic and racist. She cited Jackson’s family papers to reveal that Jackson treated this child like a pet or spectacle for his white family’s enjoyment. Shire ultimately concluded that, in adopting a Native American orphan, Jackson was implicitly asserting authority rather than acting benevolently. Shire ended by recommending that historians understand sympathy, especially during the Age of Jackson, “as an expression of power.”

While these pieces were not explicitly interested in the present American political system, by redefining the Age of Jackson they, like the rest of the research discussed at the conference, affect how individuals understand the United States today.

For Lynn, organizer of the conference, “the ambiguities and contradictions of [Jacksonian] ‘democracy’” remain interesting and important for their role in shaping the often unpleasant intricacies of American governance. “Some kind of democracy seemed to emerge from [the early republic and antebellum] eras, and it was often spearheaded by Jacksonians,” Lynn said. “But what about everything else that accompanied this democratization—support for slavery, Indian Removal, virulent white male supremacy? How can we account for the phenomenon of Jacksonian ‘Democracy’ in its totality, in a way that does justice to all that this era produced?”