Eve Arnold in the Trucial States: The United Arab Emirates before Federation 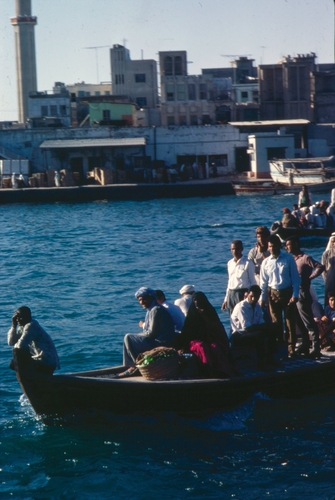 Kishwar Rizvi, Professor in the History of Art, Islamic Art and Architecture, wrote the following article that appeared in Platform, a digital forum for conversations about buildings, spaces, and landscapes:

The United Arab Emirates turned fifty on December 2nd, 2021. Questions of history and memory-construction permeate every aspect of urban life in one of the newest nations in the world. They are incorporated into visionary declarations for a vibrant civic society based on economic prosperity and a complex state ideology that places Emirati identity at its center. This identity is itself an archipelago of tribal kinships intertwined with expatriate workers and foreign investors, all of whom have varied stakes and influence. In such a heterotopic environment, ethnicities have been intermingled and dialects have formed through a polyglossia of borrowed terms and appropriated languages. While nationality remains accessible to only a very few, changes in land ownership and residency in the last decade evince the need to acknowledge the realities of a diverse public (Fig. 1).

Today, the country situates itself on the world stage as an economic powerhouse with immense oil wealth, as a geo-political arbiter, and a hub for cultural, educational, and medical tourism across Asia and Africa. Yet, in the middle of the twentieth century, cities such as Abu Dhabi and Dubai were small merchant towns, with an emerging urban infrastructure of roads and highways. What had once been trading and fishing villages along the Persian Gulf have scaled up in the past several decades into massive urban developments, becoming home to the world’s tallest building and the most recent world exposition.