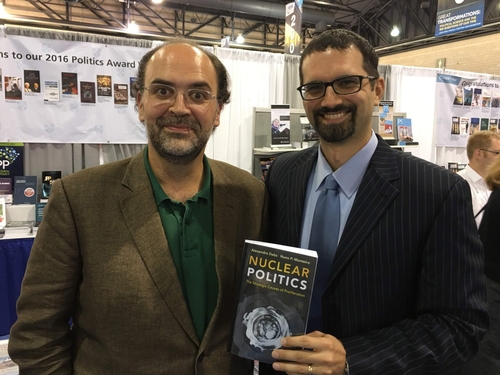 Nuno Monteiro, who passed away this month, influenced debates about U.S. dominance in the world. He was an associate professor of political science at Yale University. The following article written by Alexandre Debs, David M. Edelstein, and Sebastian Rosato appeared in The Washington Post’s Monkey Cage on May 21.

Nuno Monteiro, a Yale University political science professor who died earlier this month, made significant contributions to international relations theory that help explain how the United States navigates its role as the dominant power in the post-Cold War international system.

Monteiro, who earned his PhD at the University of Chicago, believed fiercely in the primacy of theory. For him, political science was all about identifying big, important questions about international politics, developing deductive answers and mustering evidence to assess one theory against the alternatives.

This devotion to theory was in no way an ivory-tower disregard for the “real world” of international relations. To the contrary, Monteiro saw theory as an essential tool for understanding the most vexing problems of world politics — war, nuclear proliferation and political violence.

Is U.S. dominance a force for peace? Monteiro argued no.

When the Cold War ended, columnist Charles Krauthammer famously argued the world had entered a “unipolar moment” — dominated by a single great power, the United States. Monteiro’s first book, “Theory of Unipolar Politics,” answers what he called the three most important questions about such a world: Is unipolarity durable? Is it peaceful? And, what is the best grand strategy for the dominant power?

Monteiro argued that a U.S.-dominated world order can be durable, provided the United States acknowledged that awesome power requires equally impressive self-restraint. At the same time, he claimed that unipolarity isn’t peaceful, a conclusion that ran counter to the prominent view that the end of the Cold War signaled the victory of liberal democracy. As for strategy, Monteiro argued that America’s interests would be best served by a restrained approach that differed markedly from the policies pursued by Washington since the end of the Cold War.

The dangers of U.S. dominance came to the fore in the Iraq War

The most dramatic example of the perils of U.S. dominance may be the 2003 invasion of Iraq, which Monteiro studied in his article “Known Unknowns,” co-authored with Alex Debs. In the conventional framework, rational countries may go to war, despite the potential consequences, when that strategy prevents an even worse conflict. The specter of nuclear weapons could trigger such concerns.

Debs and Monteiro argued that existing scholarship wasn’t well-equipped to analyze this problem. In the traditional framework, major changes in a country’s power happen because of factors like economics or demographics — not a specific country’s policy choices. But nuclear weapons, which countries must actively pursue, can bring about such a power shift.

Debs and Monteiro showed that once countries start to view changes in power as a result of policy choices, we expect wars under different conditions. If the international community could be sure to detect other countries’ nuclear programs — in other words, a world of perfect intelligence — then it could coerce dangerous nuclear aspirants to abandon their efforts, with no need to go to war.

The challenge is that intelligence isn’t perfect. Worrying that they may miss proliferation attempts, countries may go to war, even with dubious intelligence.

The Iraq War inspired a theory of proliferation

The above theory then served as a framework for understanding proliferation in “Nuclear Politics,” also co-authored with Debs. The theory explained not only why countries seek nuclear weapons but also how their allies can prevent them from doing so — a problem of great concern today as U.S. partners and allies like Saudi Arabia or South Korea think about whether they need a nuclear capability.

“Nuclear Politics” concludes that nuclear-aspiring countries are most likely to succeed when they have strong conventional militaries, as they are most impervious to outside pressures. The Soviet Union’s nuclear weapons program was undeterred, whereas Iraq and Syria were vulnerable to a preventive attack.

In turn, the most effective nonproliferation strategies rely on reassuring strong allies — promising them protection under the U.S. nuclear umbrella, for example. Strong proteges like South Korea need to be reassured they don’t need to develop their own nuclear capacity. Weaker allies must be reminded that proliferation might cost them the protection of their patron — this was the U.S. strategy with Taiwan, which ultimately abandoned its nuclear program.

As the United States confronts many different nuclear proliferation challenges among adversaries and its allies and partners, Monteiro’s theoretical insights help explain what can work and what is counterproductive in keeping nuclear weapons in check.

In his recent work, Monteiro continued to use theory to understand policy. In one project, he examined the rise in political violence since the end of World War II. Monteiro argued that policymakers and academics mistakenly focused on developing strategies to foster peace and stability when conflicts within countries were in fact unwinnable. When facing threats of terrorism, insurgency and civil war, he argued, governments must be prepared to engage in unending political violence, a fact that should lead us to question the role of the military in society, the scope of executive powers and the ethics of killing.

A second project investigated the future of great power politics and, specifically, U.S.-China relations. The advent of nuclear weapons meant that great power war is no longer a realistic possibility, since such a conflict would be unwinnable. Monteiro argued that U.S.-China competition will be marked not by arms races and competitive alliance building but rather by a contest between U.S. and Chinese “brands,” the distinct packages of ideas and institutions that govern the lives of billions across the world today.

Monteiro leaves a legacy of scholarship and mentorship

Nuno Monteiro was indefatigable in sharing his ideas with students and colleagues alike — teaching, he believed, would pay off in the long run, informing future policymaking. In 2020, Monteiro set up an International Relations Theory Colloquium to support junior international relations theorists, and he played a leading role in proposing a new section of the American Political Science Association devoted to IR theory.

His life cut short much too soon, Monteiro built theoretical frameworks and social networks that will guide our understanding of international relations and shape policy debates for years to come.

Alexandre Debs is an associate professor and director of graduate studies in the political science department at Yale University. He is the co-author (with Nuno Monteiro) of “Nuclear Politics: The Strategic Causes of Proliferation” (Cambridge University Press, 2017).