Memorialization unmoored: The virtualization of material mediums of social memory 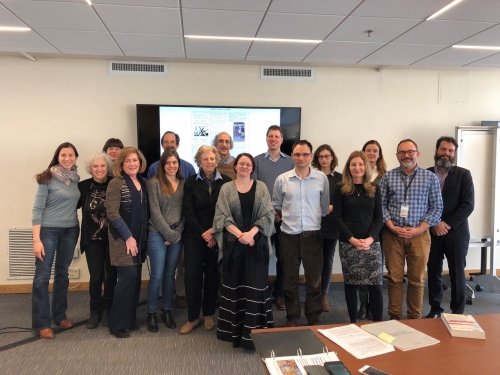 The capacity for communities, individuals, states and organizations to share and represent the past through artifacts, objects and in places is constantly and rapidly evolving. A symposium, Memorialization Unmoored: The Virtualization of Material Mediums of Social Memory, held on March 8-9, addressed some of the ways these processes are occurring in the context of aftermaths of mass violence.

The event was hosted by the Genocide Studies Program at Yale (GSP) with sponsorship from the MacMillan Center, the  Edward J. and Dorothy Clarke Kempf  Memorial Fund, and by the Reflections in the Aftermath of War and Genocide Consortium, which seeks to bring scholars and practitioners together to enhance our understanding of recovery and healing in the aftermath of mass violence and work toward preventing such events in the future.

Co-organized by David Simon, Co-Director of GSP, and Eve Zucker, a GSP visiting scholar, the symposium gathered 17 scholars and practitioners to discuss material and digital forms of mass violence, the connections between the material and the digital, the ethical issues of representation, and new directions and developments in the collection, maintenance, and distribution of testimonial archives and materials. The increasing use of artificial intelligence in memorial and research practices was also included.

The symposium began on the evening of the 8th with a pair of keynote addresses focusing on memorialization of September 11th. Mary Fetchet, founder and director of the non-profit, Voices of September 11th, delivered a moving speech highlighting the many challenges faced by survivors and the families of victims of 9/11 and steps taken to support and commemorate the victims. Her presentation was followed by Alexandra Drakakis, the Associate Curator of the 9/11 Museum, who provided insights into curation and placement of artifacts in the 9/11 Memorial Museum exhibits and discussed how the objects are connected to the stories of the individuals who they belonged to.

The next day featured three panels and two feature presentations. The first panel included presentations on the efforts to memorialize the Armenian Genocide in Turkey; the aftermath of September 11th through an imaginary Guantanomo Prison featured on a web-based platform; a comparison of state versus local sites of memorialization of the Genocide against the Tutsi in Rwanda, and the de-localization of a memorial site in Croatia following of the distribution of a documentary of the site. The subsequent discussion included a lively debate on the ethics of representation including the role of states and national and international funding agencies on memorialization.

The second panel included an examination of online communities on social media and the impacts of these platforms on reconstructing the past and contesting official silences and absences in state testimonies. Topics included an social media-based community of former Portuguese combatants from the colonial wars in Africa; the efforts of online Haitian diaspora to speak out about the mass killings under Duvalier; and the uploading and sharing of Cambodian classical music that has helped to reconnect the pre-Khmer Rouge past with the present and merged the past with the present. Symposium participants discussed the contestation and preservation of memory in politicized and adverse contexts.

A final panel covered the role of testimony among Columbian rape victims as a means to advocacy, the selective memory of victims in the Natzweiler-Struthof concentration camp in France, and memoirs and a pathway to understanding the Holocaust experience.

The symposium also featured special presentations. The first, featuring the Yale Fortunoff Archive of Holocaust testimonies, was given by Curator Stephan Naron and research fellow Gabor Toth. Naron described the many ethical considerations that have gone into the managing of the archive whereas Toth presented his research using Artificial Intelligence (AI) tools to search the testimonies in an attempt to locate some features of experience that would have been common to those that did not survive.

The second featured documentary filmmaker Taylor Krauss, who addressed a wide range of issues including the potential pitfalls of new high tech methods to present Holocaust testimonies, as well as highlights from his work with survivors of the Rwandan Genocide and the ongoing genocide of the Yazidi in Iraq. Beyond covering and debating contemporary issues in memorialization, the symposium examined the challenges and directions that lay ahead with the rise of various forms of technology in public and private memorialization practices. On one hand this technology gives voice and agency to survivors and families of victims, but on the other hand it opens up new uncertainties, vulnerabilities, and questions over which voices will be heard and in what manner. Having brought together scholars from across several disciplines, focusing on events in different countries, time periods, and political contexts, the symposium proved to be an illuminating experience for all participants.