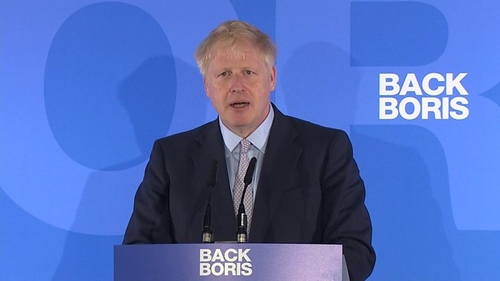 Last Friday, Theresa May resigned as leader of the British Conservative Party and today the party’s 313 MPs voted in the first of several ballots for their preferred candidate among the ten nominated for the position. Boris Johnson, the former Foreign Secretary, led the nine other candidates by a substantial margin – indeed, by such a substantial margin that it would seem to be a foregone conclusion that he will, in due course, be selected by the party’s members to be its leader and, as such, will replace Theresa May as prime minister.

Two of the 13 candidates dropped out before the rules were changed and a third dropped out soon after they were changed, leaving ten candidates on today’s ballot. Those candidates and the number of votes they received are: Johnson (114); Jeremy Hunt, Foreign Secretary (43); Michael Gove, Environment Secretary (37); Dominic Raab, former Brexit Secretary (27); Sajid Javid, Home Secretary (23); Matt Hancock, Health Secretary (20); Rory Stewart, International Development Secretary (19); Andrea Leadsom, former Leader of the House (11); Mark Harper, former Chief Whip (10); and Esther McVey, former Work and Pensions Secretary (9). Leadsom, Harper, and McVey are therefore eliminated from the second ballot, which will take place next Tuesday. The subsequent rounds of balloting will take place next Wednesday and Thursday, after which the party will conduct the postal vote of its membership. The winner is expected to be announced during the week of July 22-26, before the Parliament’s summer recess which typically begins in late July and will last until Sept. 10.

Johnson has made it clear he would prefer to leave the EU with an approved withdrawal agreement rather than without one. But as he said yesterday in launching his campaign for the leadership, he believes the threat of a no-deal exit is a “vital” negotiation tool and, accordingly, has said the UK will leave on Oct. 31, with or without a deal. However, it’s quite possible the House of Commons will at some point prohibit a no-deal exit. Yesterday, for example, a motion put forward by the Labour Party to take control of the parliamentary timetable in order to allow the opponents of a no-deal exit to table legislation prohibiting such an exit was narrowly defeated, 309 to 298, thanks to eight Labour MPs who joined 289 Conservatives, 10 DUP MPs and two independents in opposing the motion, and to 17 other Labour MPs who didn’t vote. If, as seems quite likely, Johnson becomes Conservative leader and prime minister and tries but is unable to reopen the negotiation of the withdrawal agreement – something the EU has said won’t happen – it’s also quite likely the House will try again to prohibit a no-deal exit – and, failing that, will subject him to a vote of confidence.