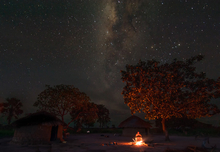 The Jackson Institute for Global Affairs will host a screening of the documentary film, “My Star in the Sky,” which depicts a story of survival, friendship and love between two child soldiers abducted by the Lord’s Resistance Army (LRA) during the conflict between Uganda and Sudan. Following the screening, filmmakers Michael “Mick” Mulroy and Eric “Olly” Oehlerich will discuss the film.

The event is open to members of the Yale community with a Yale ID. Please bring your Yale ID; it will be checked at the door. A light dinner will be served.

The LRA is an insurgent group founded in 1987 with the aim of overthrowing the government of Uganda. It is known for its brutality and war crimes, including the use of child soldiers. The United States became involved in efforts to combat the LRA in 2008, and in 2010 President Barack Obama signed the Lord’s Resistance Army Disarmament and Northern Uganda Recovery Act to end the insurgency and bring its leader, Joseph Kony, to justice via the International Criminal Court.

During the operations that followed, two members of the U.S. special operations community became friends with Anthony Opoka, one of the child soldiers that managed to escape from the LRA and joined the Ugandan Army. Anthony worked as a cultural advisor assisting in the joint US and Uganda Counter-LRA mission called Operation Observant Compass. During this Operation, Anthony revealed that he was not only a former member of the LRA, but he was also Joseph Kony’s personal radio operator. The information he provided was key in the effort to end the LRA and bring other abducted child soldiers home.

The two friends thought that Anthony’s story was too inspirational to not be told. They subsequently filmed this documentary during their personal time. It is about Anthony’s life—and the tale of how he and his wife, Florence, survived and eventually escaped from the LRA.

About the Filmmakers:
Michael “Mick” Mulroy is a retired Paramilitary Operations Officer in the CIA and current Deputy Assistant Secretary of Defense for the Middle East in the Department of Defense. Eric “Olly” Oehlerich is a U.S. Navy SEAL Commander and was a member of U.S. Africa Command Special Operations Component at the time of the making of this documentary. Mulroy and Oehlerich intend to start a non-profit company to study how to end low intensity conflicts, eliminate the use of child soldiers, and help rehabilitate them back into society.

Please note: This documentary has depictions and descriptions of extreme violence. Viewer discretion is advised. The CIA’s Publication Review Board has approved this documentary for release. Remarks made at this presentation or in the documentary itself are made in a personal capacity and do not necessarily represent the views of DoD or the U.S. Government.