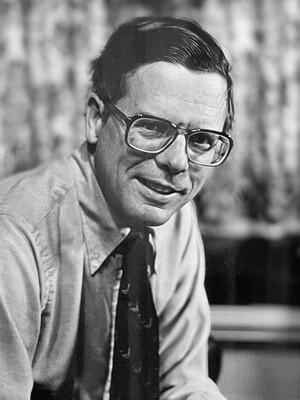 Gaddis Smith, a renowned scholar of American foreign relations and maritime history and the Larned Professor Emeritus of History, died at his home in New Haven on Dec. 2, after a long illness. He was 90.

If ever there was a modern “Mr. Yale”, Gaddis Smith would qualify for that title. During the 18th and 19th centuries, Yale faculty often arrived on campus first as undergraduates and never left. In the modern era this has been infrequently so. Smith was an exception.

After receiving his bachelor’s degree from Yale College in 1954, and his Ph.D. from the Department of History seven years later, he spent three years at Duke, and in 1961 returned to Yale, where he would spend the rest of his career.  At Yale, he chaired the Department of History, served as master of Pierson College, and directed the Yale Center for International and Area Studies (YCIAS).

He was also an expert on maritime history, and taught courses and wrote articles with titles such as “Agricultural Roots of Maritime History” and “Britain’s Clandestine Submarines, 1914-1915: An essay in the History of the North Atlantic Triangle.”

His interest in everything nautical gave him something in common with William F. Buckley, Jr. ’50, whom he had briefly known as an undergraduate. On one famous evening at Pierson College, they agreed not to talk politics, and regaled a crowd with their shared knowledge of and passion for everything ocean going.

Even as an undergraduate Smith was a prominent figure on campus, serving as the chairman (as it was then called) of the Yale Daily News in 1953. Smith steered the paper masterfully during that year in a post-war era which saw the abolition of Yale’s special freshman year; the aftermath of the publication of Buckley’s controversial “God and Man at Yale”; the McCarthy era, when the House of Representatives’ Un-American Activities Committee began investigations of alleged Communist activities in the nation’s colleges; and the development of the Ivy League, when, under the leadership of Yale president Whitney Griswold, eight colleges joined to develop their own philosophy of the place of sport in undergraduate life.

There was some irony when, in 1972, Smith became master of Pierson College, since this well-known Yale College figure had never lived in a residential college. In the summer after his freshman year in 1951, he had married Barclay Manierre, and — much to the dislike of the Yale authorities who had lectured him on the importance of living in college — he had to move off campus.

He made up for that missed on-campus experience during his mastership when, for nine years, he (and Barclay) were model heads of college, energetic, gracious and welcoming to all kinds of students. And he was devoted to the ideal of the college system and to the distinctiveness of Yale’s residential colleges which, as he used to opine, should all be the same in their singularity and quirkiness.

Smith’s campus presence, which made him known to all, transcended his roles as scholar, master, and administrator. Much of this was due to his reputation as a captivating teacher. His courses — in particular, his iconic lecture course on American Diplomatic History — attracted crowds of students. Comfortable at the podium and in large venues, he was a superb public speaker. And like certain other magnetic figures of his day — Vincent Scully, John Blum, Maynard Mack — he packed his classrooms to the rafters.

Also significant was his standing among the alumni. As one of them, who was also a professor, he tirelessly responded to endless requests for lectures on both historical and modern political subjects and on Yale matters at reunions and at alumni gatherings around the nation.

One of his former graduate students, Fredrik Logevall, the Laurence D. Belfer Professor of International Affairs at Harvard, remembers how Smith, even while somewhat reserved and shy in person, “in the large lecture hall he came alive, transformed into a dynamic, spellbinding orator.

“I can easily recall the many instances when the auditorium would go absolutely quiet, as he held forth on the Pearl Harbor attack, or the Bay of Pigs invasion, or the Iran Hostage Crisis, the undergrads hanging on every word,” Logevall said.

Smith was also among the first to recognize the importance of moving beyond the parochialism that had come to characterize the university. He was the head of Yale Center for International and Area Studies (later the MacMillan Center), and worked assiduously towards the 1994 construction of Luce Hall — an anchor for Yale’s serious embrace of full-fledged internationalism during the presidency of Richard Levin — from the recruitment of faculty to the development of curriculum, and to greatly enhancing study abroad.

With the advent of Luce, the study of internationalism itself was transformed since it provided handsome spaces to teach and host visitors, and a locus for faculty, graduate students, and undergraduates to gather, exchange ideas, and socialize. Gaddis was the presiding spirit of the place.

Smith also acted, in effect, as one of Yale’s historians. Few knew as much about Yale as Smith: Many will not forget his DeVane Tercentennial course in 2001 on the university’s history, and his gatherings of readings for those lectures that illuminated Yale’s past for legions of Yalies and alumni. The readings and lectures provided the background to his book “Yale and the External World: The Shaping of the University in the 20th Century,” which will be published in the spring.

Levin, Yale’s president from 1993 to 2013, wrote that Smith “was an early champion of internationalizing Yale’s curriculum, its student population, and the range of summer experiences offered to undergraduates. We are fortunate that his long-awaited history will soon be published by Yale University Press.”

Renowned for his teaching, Smith received the prized William Clyde DeVane Medal for distinguished teaching and scholarship from the university’s chapter of Phi Beta Kappa, and The Harwood F. Byrnes-Richard B. Sewall Prize for Teaching Excellence. The Gaddis Smith International Book Prize for the best first book by current Yale faculty member, is awarded annually by the MacMillan Center. He also received The Mory’s Cup for service to the University in 1997.

Given Smith’s long and devoted service to Yale, it seems fitting that, even after his death, his final book will draw attention to his influence in the university’s history.

Smith was predeceased by his wife Barclay and son Tarrant. He is survived by his son Edgar, daughters-in-law Margaret Jones and Alyssa Lappen, grandson Emmet Gaddis Smith ’09, and granddaughter Leah Pollock Smith.  A memorial service will be held some time during the spring semester.