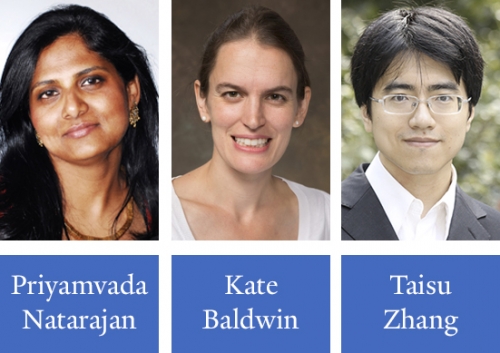 Three Yale faculty members have been awarded book prizes by the Whitney and Betty MacMillan Center for International and Area Studies at Yale.

“Mapping the Heavens” provides a tour of the “greatest hits” of cosmological discoveries—the ideas that reshaped our universe over the past century. The cosmos, once understood as a stagnant place, filled with the ordinary, is now a universe that is expanding at an accelerating pace, propelled by dark energy and structured by dark matter. Priyamvada Natarajan, our guide to these ideas, is someone at the forefront of the research—an astrophysicist who literally creates maps of invisible matter in the universe. She not only explains for a wide audience the science behind these essential ideas but also provides an understanding of how radical scientific theories gain acceptance.

The formation and growth of black holes, dark matter halos, the accelerating expansion of the universe, the echo of the big bang, the discovery of exoplanets, and the possibility of other universes—these are some of the puzzling cosmological topics of the early twenty-first century. Natarajan discusses why the acceptance of new ideas about the universe and our place in it has never been linear and always contested even within the scientific community. And she affirms that, shifting and incomplete as science always must be, it offers the best path we have toward making sense of our wondrous, mysterious universe.

The Paradox of Traditional Chiefs in Democratic Africa shows that unelected traditional leaders can facilitate democratic responsiveness. Ironically, chiefs’ undemocratic character gives them a capacity to organize responses to rural problems that elected politicians and state institutions lack. Specifically, chiefs’ longer time horizons encourage investment in local institutions that enable the provision of local public goods. This is the paradox of traditional chiefs in democratic Africa: elected politicians can only effectively respond to rural constituents through institutions constructed and maintained by local leaders who are not worried about electoral terms. Furthermore, the critical role played by chiefs in brokering local development projects forces us to reassess how we understand the basis of their political influence during elections. The book examines the effects of traditional leaders on the electoral connection in Africa through a multi-method approach that combines qualitative research, surveys, and experiments, with particular attention to the Zambian case.

Tying together cultural history, legal history, and institutional economics, “The Laws and Economics of Confucianism: Kinship and Property in Pre-Industrial China and England” offers a novel argument as to why Chinese and English pre-industrial economic development went down different paths. The dominance of Neo-Confucian social hierarchies in Late Imperial and Republican China, under which advanced age and generational seniority were the primary determinants of sociopolitical status, allowed many poor but senior individuals to possess status and political authority highly disproportionate to their wealth. In comparison, landed wealth was a fairly strict prerequisite for high status and authority in the far more ‘individualist’ society of early modern England, essentially excluding low-income individuals from secular positions of prestige and leadership. Zhang argues that this social difference had major consequences for property institutions and agricultural production.