Pro-EU liberals and Rutte’s VVD do well, but so do right-wing populists, in Dutch election 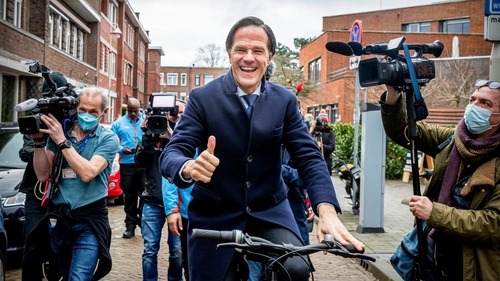 In an election in which the polls were open for three days, in order to allow social distancing among the voters, and those over 70 were able to vote by mail, Dutch voters elected a new Second Chamber of the parliament this week. The most consequential outcome for both the country and the EU was that Mark Rutte, the leader of the center-right People’s Party for Freedom and Democracy (VVD), prime minister since 2010, and leader of the “frugal four” member states that are budget hawks in the EU, will in all likelihood continue as prime minister for another four years. The VVD won the largest share of the national vote, 21.9 percent, an increase of 0.7 percent over its vote in 2017, and 35 of the 150 seats in the Second Chamber, an increase of two.

It is important to say “in all likelihood” in regard to Rutte having won another four years as prime minister because, with an electoral system in which the seats in the Second Chamber are allocated proportionally among the parties on the basis of their overall vote in the country without a minimum threshold, such as 4 or 5 percent, as often exists in other countries with proportional representation, the de facto threshold of representation a party must surpass in order to win a seat is 0.67 percent of the national vote. That means it is relatively easy, compared with the situation in other European polities, for a party to win a seat and that, as a result, an unusually large number of parties contest elections and an unusually large number of parties win seats. In this week’s election, for example, 37 parties ran and 17 won at least one seat. And that, in turn, means that, in order to win the support of a majority in the parliament, a new government generally must include several parties and the discussions to form a majority can take some time.

In this week’s election, only one party, the VVD, won more than 15 percent of the vote, meaning, given the distribution of support among the parties, that, in order to win confirmation with a majority in the Second Chamber, a new government will probably have to include, as the outgoing government did, at least four parties. And those parties would have to agree on a joint program, which of course can take some time, especially if each party knows that it is a necessary component of the coalition if the latter is to win a majority in the parliament. In 2017, for example, it took 225 days for Rutte to put together a four-party coalition that included, in addition to the VVD, the center-right Christian Democratic Appeal (CDA), the successor to the former Catholic Peoples Party, the center-left, liberal and pro-EU Democrats 66 (D66—the name refers to the year in which the party was founded), and the Christian Union (CU), a predominantly Protestant center-right party.

D66, led by Sigrid Kaag, a former UN diplomat who has been an outspoken opponent of racism and hostility toward Muslim immigrants, did well in the election, increasing its share of the vote from 12.2 percent in 2017 to 14.9 percent this week, and is likely to continue as a member of a Rutte-led government, and as the second-largest party in the governing coalition it would be likely to have its choice of heading either the finance, interior or foreign ministry. Another pro-EU party also did well; Volt, running for the first time, won 2.4 percent of the vote. The CDA, which held the finance ministry in the outgoing government, also may retain its membership in a new Rutte-led coalition government, notwithstanding the fact that its share of the vote dropped from 12.4 percent in 2017 to 9.5 percent. In contrast to the setback experienced by the CDA, the CU retained its 2017 share of the vote, 3.4 percent.

Attention will now turn to the discussions between Rutte, Kaag of the D66, Wopke Hoekstra, the leader of the CDA and current finance minister, and other potential coalition partners in a new government. Those discussions will no doubt take some time, in part because the other party leaders will bring their own preferences and priorities in regard to programs and offices to the discussions. If the four parties that formed the outgoing government renew that coalition, they would hold a narrow majority, 78 of the 150 seats, in the new Second Chamber, compared with the even smaller majority—indeed, a minimal majority—76 of the 150 seats they held in the outgoing Second Chamber. The fact that the other parties involved in the coalition discussions will know that, perhaps apart from the center-left Labor Party (PvdA), which won 5.7 percent of the vote and nine seats this week as they had in 2017, Rutte has no other obvious alternative coalition partners capable of delivering a four-party majority will no doubt strengthen their bargaining positions and cause the discussions to be more protracted than they might otherwise be.

Nevertheless, as the coalition discussions begin, there has already been a large collective sigh of relief in the Netherlands and throughout the EU about two consequences of this week’s election—first, the fact that Wilders, the Dutch arch-xenophobe, suffered an electoral setback; and second, the fact that Mark Rutte, after Angela Merkel the most experienced leader in the EU, will in all likelihood continue as prime minister.