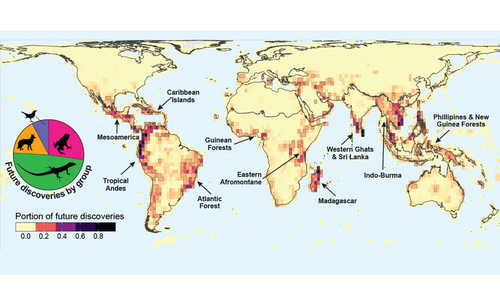 Less than a decade after unveiling the “Map of Life,” a global database that marks the distribution of known species across the planet, Yale researchers have launched an ambitious and perhaps even more important project — creating a map of where life has yet to be discovered.

For Walter Jetz, a professor of ecology and evolutionary biology at Yale who spearheaded the Map of Life project, the new effort is a moral imperative that can help support biodiversity discovery and preservation around the world.

“At the current pace of global environmental change, there is no doubt that many species will go extinct before we have ever learned about their existence and had the chance to consider their fate,” Jetz said. “I feel such ignorance is inexcusable, and we owe it to future generations to rapidly close these knowledge gaps.”

The new map of undiscovered species was published March 22 in the journal Nature Ecology & Evolution. A browsable version is available online.

Lead author Mario Moura, a former Yale postdoctoral associate in Jetz’s lab and now professor at Federal University of Paraiba, said the new study shifts the focus from questions like “How many undiscovered species exist?” to more applied ones such as “Where and what?”

According to conservative scientific estimates, only some 10 to 20 percent of species on earth have been formally described. In an effort to help find some of these missing species, Moura and Jetz compiled exhaustive data that included the location, geographical range, historical discovery dates, and other environmental and biological characteristics of about 32,000 known terrestrial vertebrates. Their analysis allowed them to extrapolate where and what kinds of unknown species of the four main vertebrate groups are most likely to yet be identified.

They looked at 11 key factors which allowed the team to better predict locations where undiscovered species might be located. For instance, large animals with wide geographical ranges in populated areas are more likely to have already been discovered. New discoveries of such species are likely to be rare in the future. However, smaller animals with limited ranges who live in more inaccessible regions are more likely to have avoided detection so far.

“The chances of being discovered and described early are not equal among species,” Moura said. For instance, the emu, a large bird in Australia, was discovered in 1790 soon after taxonomic descriptions of species began. However, the small, elusive frog species Brachycephalus guarani wasn’t discovered in Brazil until 2012, suggesting more such amphibians remain to be found.

Moura and Jetz show that the chances of new species discovery varies widely across the globe. Their analysis suggests Brazil, Indonesia, Madagascar, and Colombia hold the greatest opportunities for identifying new species overall, with a quarter of all potential discoveries. Unidentified species of amphibians and reptiles are most likely to turn up in neotropical regions and Indo-Malayan forests.

Moura and Jetz also focused on another key variable in uncovering missing species — the number of taxonomists who are looking for them.

“We tend to discover the ‘obvious’ first and the ‘obscure’ later,” Moura said. “We need more funding for taxonomists to find the remaining undiscovered species.”

But the global distribution of taxonomists is greatly uneven and a map of undiscovered life can help focus new efforts, Jetz noted. That work will become increasingly important as nations worldwide gather to negotiate a new Global Biodiversity Framework under the Convention of Biological Diversity later this year and make commitments to halting biodiversity loss.

“A more even distribution of taxonomic resources can accelerate species discoveries and limit the number of ‘forever unknown’ extinctions,” Jetz said.

With partners worldwide, Jetz and colleagues plan to expand their map of undiscovered life to plant, marine, and invertebrate species in the coming years. Such information will be help governments and science institutions grapple with where to concentrate efforts on documenting and preserving biodiversity, Jetz said.

Written by Bill Hathaway for YaleNews.