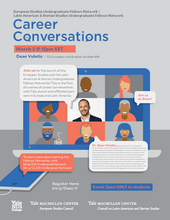 Join the European Studies Undergraduate Fellows Network for the next talk in a series of career conversations with Yale alumni and affiliated partners in Europe.
Featuring Dean Vuletic ’02 E&RS MA
Dr. Dean Vuletic graduated with a MA in Russian and East European Studies in 2002. While at Yale University, he was a Fulbright Scholar. Since graduating, he has completed a doctoral degree in history at Columbia University and worked in academia and journalism, holding positions in Austria, the Czech Republic, Germany, Italy, and the United States. As a historian of contemporary Europe based at the University of Vienna, he has written the first scholarly book about the history of the Eurovision Song Contest, Postwar Europe and the Eurovision Song Contest (London: Bloomsbury, 2018). For this he received a Marie Skłodowska-Curie Fellowship, one of the European Union’s most prestigious research awards. He is now a leading media commentator and public speaker on the Eurovision Song Contest, one of Europe’s biggest popular cultural phenomena.
This talk is only open to undergraduate and graduate students of Yale University and Yale-NUS College
Register to attend virtual talk: https://bit.ly/Dean-V
To learn more about joining the Fellows Network: bit.ly/ESCUndergradNetwork
Sponsored By: European Studies Council and Council on Latin American & Iberian Studies of the MacMillan Center at Yale; and Yale-NUS College