Challenges of tackling the learning crisis in India 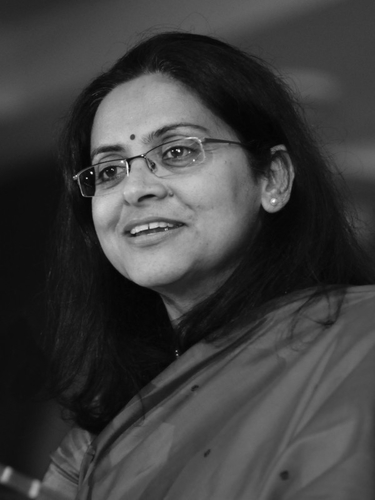 On March 28, the Indu Bhatt Annual Memorial Lecture welcomed Rukmini Banerji, an economist and CEO of Pratham, a research group aimed at addressing gaps in India’s education system with a focus on measuring and improving learning outcomes. Educated in India as an economist, Banerji was a Rhodes Scholar at Oxford University and has previously served as a program officer at the Spencer Foundation. Her lecture, “Sowing the Seed, Reaping the Harvest: Challenges of Tackling the Learning Crisis in India,” discussed efforts to solve the learning crisis in India. (view lecture)

She began by describing her experience working in India. A magistrate of a small school district approached her and asked how he could improve attendance, which seemed to be stuck around 60-70%. He had tried everything he knew how to do, including ensuring timely distribution of textbooks and maintaining teacher attendance.

Through her work at Pratham, she has observed and contributed to improvements in Indian education. She noted that over the past 30 years, the number of schools has increased, ensuring increased accessibility to education. Comparing census data of 8th grade education from 2008 to 2018, she said, “In this ten-year period, not only have we ensured that everyone is enrolled, but I think it is now the case that everyone stays.”

Despite these improvements in enrollment and retention, Banerji identified an “invisible problem” in the Indian education system: although children were physically present, they were not learning “as much as we thought.” She described the problem by saying that “teachers are getting discouraged… parents are getting disappointed… and the kids are just disinterested.”

To make the problem more concrete, Pratham conducted extensive student-focused research in schools. Banerji described a few key findings. First, much of the curriculum was not suited to the students’ skill levels. She noted, “if you start with things people can’t do, then the disinterest comes in much earlier.” Additionally, she found that for students, “reading a sentence is sometimes harder than reading a set of connected sentences” because children often incorrectly guessed ahead.

Banerji then explained the importance of engaging the community. “Very interestingly, and we felt this right from the beginning… the outside school space is not given enough value.” She described how Pratham established a program of “village report cards” where people in villages were asked their reading and math levels. These report cards, Banerji noted, helped start conversations about education, and were able to “spread out the ability to see the problem and also think about how the problem could be solved.”

Using their research, Pratham implemented a program to improve learning outcomes. Banerji attributes the success to a clear goal of acquiring foundational skills, developing student confidence, and placing students based on skill groups rather than grade. She said, “I think you have to be willing to let go of a lot of the scaffolding that has actually organized our basic school system and be willing to take the jump.”

She then discussed four main criticisms of Pratham’s outcome-based approach to improving the Indian education system. Some people argue there must be a certain number of inputs in place before outputs can be discussed. For example, inputs like the number of teachers needed must come before outcomes such as learning. Other critics claim that teachers are the weak link in the system, and that they must be better trained, which requires institution-building. The third criticism addresses inefficiencies in the education system itself. People of this viewpoint argue that there must be a push to improve systematic functioning, including the usage of monitoring apps and better teacher deployment systems. Lastly, the fourth group of people believe that the learning crisis is a result of the lack of incentives for the different players involved.

Banerji struggled to understand why the education crisis is not a bigger political issue. Though education is sometimes prioritized by individual politicians, it “does not seem to seep into the parties at the moment.” Regarding bigger picture factors that may contribute to the learning crisis, she said, “perhaps this is also an obsession with excellence rather than… with equity.”