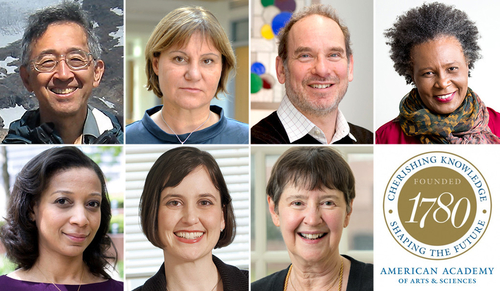 Seven Yale faculty members are among the artists, intellectuals, and prominent leaders newly elected as members of the American Academy of Arts and Sciences for innovative accomplishments in their fields.

“The new members of the class of 2020 have excelled in laboratories and lecture halls, they have amazed on concert stages and in surgical suites, and they have led in board rooms and in courtrooms,” AAAS president David W. Oxtoby said in announcing the 276 new inductees on April 23. “With today’s election announcement, these new members are united by a place in history and by an opportunity to shape the future through the academy’s work to advance the public good.”

The Yale faculty elected to the academy represent a variety of scholarly disciplines, including science and social science, poetry and psychology, law and religious studies:

Shun-ichiro Karato, professor of geology and geophysics and mechanical engineering and materials science, focuses his research on materials properties in connection to the dynamics and evolution of Earth and other planets. His work includes examining the role of water in planetary processes, and experimental high-pressure and temperature studies on physical properties such as plastic deformation and electrical conductivity.

Isabela Mares, the Arnold Wolfers Professor of Political Science, focuses her research on a range of topics in comparative politics and political economy, including democratization, clientelism and corruption, taxation and fiscal capacity development, and social policy reforms in both developed and developing countries. Her books include “The Politics of Social Risk: Business and Welfare State Development,” “Taxation, Wage Bargaining and Unemployment,” and “Conditionality and Coercion: Electoral Clientelism in Eastern Europe” (with Laruen Young). She is currently completing a book titled “Democratization after Democratization,” which examines the adoption of electoral reforms limiting electoral irregularities in the Western world.

Mares’ research has won numerous awards, including the Gregory Luebbert Award for Best Book in Comparative Politics and for best article in comparative politics from the American Political Science Association.

James Mayer, the Charlotte Fitch Roberts Professor of Chemistry, conducts research that spans the fields of inorganic, materials, bioinorganic, organometallic, and physical organic chemistry. His laboratory’s primary focus is on redox reactions that involve bond formation and bond cleavage, in particular the coupled transfers of protons and electrons. Proton/electron transfers are central to a variety of important processes, from fuel cells and solar fuels to bioenergetics, among others.

Mayer has been awarded numerous named lectureships and won the 2018 Chemical Society Award in Inorganic Chemistry, among other honors. He has been a fellow of the American Association for the Advancement of Science since 1998.

Claudia Rankine, the Frederick Iseman Professor of Poetry, is the author of five collections of poetry, including “Citizen: An American Lyric” and “Don’t Let Me Be Lonely”; several plays, including “Provenance of Beauty: A South Bronx Travelogue” and “The White Card”; and is the editor of several anthologies, including “The Racial Imaginary: Writers on Race in the Life of the Mind. “Citizen” received the 2015 Forward Prize for Best Collection, the National Book Critics Circle Award for Poetry, the NAACP Image Award, the PEN Open Book Award, and the L.A. Times Book Award for poetry.

The recipient of a MacArthur Fellowship in 2016, Rankine’s many other honors include a Visionary Leadership Award from New Haven’s International Festival of Arts & Ideas. With part of her MacArthur grant, she established The Racial Imaginary Institute, which explores white supremacy in American life and culture.

Jennifer Richeson, the Philip R. Allen Professor of Psychology, researches multiple psychological phenomena related to cultural diversity. Among other topics, she has explored how people experience racial and other forms of societal diversity, including efforts to navigate one-on-one interracial interactions and the political consequences of increasing racial/ethnic diversity of the United States. Much of her recent research considers how people reason about and respond to societal inequality and injustice.

Richeson is director of Yale’s Social and Perception Lab, which examines the ways in which social group memberships and affiliations, such as race, gender, and socioeconomic status, impact how people think, feel, and behave.  She has been honored with many awards, including a MacArthur Fellowship, a John Simon Guggenheim Memorial Foundation Fellowship, and the Career Trajectory Award from the Society of Experimental Social Psychology.

Christina M. Rodríguez ’95, ’00 J.D., the Leighton Homer Surbeck Professor of Law at Yale Law School, focuses her research on constitutional law and theory; immigration law and policy; administrative law and process; language rights and policy; and citizenship theory. She has used immigration law and related areas as vehicles through which to explore how the allocation of power (through federalism and the separation of powers) shapes the management and resolution of legal and political conflict. Her work also has involved examination of the effects of immigration on society and culture, as well as the legal and political strategies societies adopt to absorb immigrant populations.

Rodríguez is a former deputy assistant attorney general in the Office of Legal Counsel at the U.S. Department of Justice. Her new book “The President and Immigration Law,” coauthored with Adam Cox, will be published by Oxford University Press September 2020. It explores the long history of presidential control over immigration policy and its implications for the future of immigration law and the presidency itself.

Adela Yarbro Collins, the Buckingham Professor Emerita of New Testament Criticism and Interpretation, is a scholar of Jewish and Christian apocalypticism, the Gospel of Mark, and feminist interpretations of the Bible. Her books include “New Perspectives on the Book of Revelation” (editor; 2017), “King and Messiah as Son of God,” (coauthored with John J. Collins) and “Mark: A Commentary” in the Hermeneia commentary series. Among her other publications are “The Beginning of the Gospel: Probings of Mark in Context,” “Crisis and Catharsis: The Power of the Apocalypse,” and The Combat Myth in the Book of Revelation.”

Founded in 1780, the American Academy of Arts and Sciences honors exceptional scholars, leaders, artists, and innovators and engages them in sharing knowledge and addressing challenges facing the world. Among the other inductees this year are singer/songwriter Joan Baez, former attorney general Eric H. Holder Jr., and author Ann Patchett.