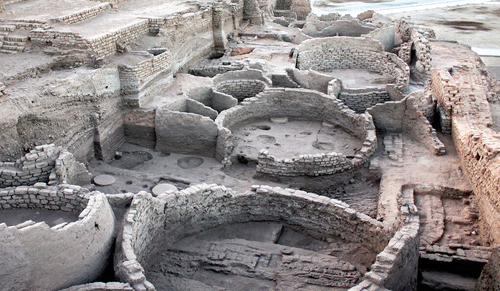 With record-breaking heat waves gripping many regions of the U.S. and unprecedented floods wreaking havoc from China to Germany, the existential threat of climate change has once again risen to the forefront of public discourse.

But this is not the first time that extreme weather events have posed a challenge for humankind. In fact, the case of ancient Egypt offers useful insights into human responses to environmental stress, says Nadine Moeller, professor of Near Eastern languages and civilizations, and Joseph Manning, professor of history and classics.

As humans reevaluate how to live in the face of a changing climate, they say, ancient Egypt offers some cautionary tales.

“Throughout human history, climate and climate change is certainly something that we worried about as a stressor, especially in societies that are already rather vulnerable,” said Manning. “And we should really be paying attention right now.”

For centuries, annual summer flooding of the Nile was instrumental for agricultural production in ancient Egypt, said Moeller. Although the flood cycles naturally varied, archaeological evidence suggests that weather patterns became more erratic during certain critical periods. For instance, floods wouldn’t occur for many years at a time and droughts would ensue.

Although these weather events were not the consequence of human activities — unlike many of the episodes now unfolding worldwide, according to scientists — they were linked to a changing climate, researchers say.

In her work, Moeller examines climate history related to the so-called 4.2 ka BP event, a period of arid weather globally which started in approximately 2200 BCE. This roughly coincided with the collapse of Egypt’s Old Kingdom, and continued for several centuries into the First Intermediate Period. In Egypt, this climate event meant lower Nile River levels and drier conditions over time, which then likely induced lower crop yields, she said.

“Archaeological analysis of sediment deposits provides strong evidence that there were dryer conditions and more erosion,” said Moeller. “Textual sources like autobiographies inscribed in tombs from this era contain more mentions of famine, too.” These historical accounts aren’t always entirely reliable; if a local ruler’s inscription, say, boasts about being able to feed his people despite a bad famine, it could just be a bit of propaganda. However, Moeller said, there are undeniably more inscriptions than previous periods talking about food shortages.

Fast forward to Egypt under the Ptolemaic dynasties (305-30 BCE), which is Manning’s area of expertise. As part of the Yale Nile Initiative, a four-year project examining the link between the hydrological cycle and human society in ancient Egypt, Manning focuses on the climate effects of massive volcanic eruptions on annual Nile floods during the Ptolemaic Kingdom. These eruptions may have shifted the patterns of the annual African monsoon, suppressing Nile floods and disrupting agricultural yields. This, in turn, may have contributed to growing social unrest and political turmoil that ultimately led to the end of the Ptolemaic Kingdom.

To what extent, then, can we say that a changing climate caused the collapse of otherwise prosperous Egyptian powers?

In the case of the Old Kingdom, climate change was just one factor that caused its ultimate downfall, Moeller said. Likewise, Manning said, environmental change was one of several stressors that, when combined together, contributed to large-scale, complex societal and political change during the Ptolemaic period.

“Societies don’t just stick together naturally,” Manning said. “The big lesson of history is that societies do fall apart due to a variety of compounding factors. Social inequality and significant environmental change are two big ones.”

Climate stress, including the decline in Nile flooding, caused significant misery for the ancient Egyptians. But the ways that the society managed to stay afloat and cope with the effects of uncontrollable environmental change offer important lessons, the researchers said. “Ancient societies were extremely resilient,” Moeller said. “They would find solutions to get by, to survive. Migration was the most extreme one. There was also increased localized governance in response to the effects of climate change.”

Indeed, towns seem to have expanded during the time of famine in the Old Kingdom — perhaps, as Moeller noted, because more people moved there from the countryside in order to have greater access to supplies and support.

“Cooperation is really key,” Manning added. “What kept the Old Kingdom together for many centuries was a fairly stable political equilibrium and economy.”

Since climate change related to Nile failures disrupted agricultural yield, adaptation naturally involved rethinking food systems. For instance, Moeller and Manning both emphasized the development of long-term grain storage facilities as a key adaptive response to climate stress. “For towns, that included building their own grain reserve so that they could then distribute grain to the inhabitants,” said Moeller.

“Changing subsistence patterns was also big,” Moeller added. She is currently investigating how diets might have changed during climate-induced food shortages — people switching to different foods or increasing intake of certain foods based on availability — in her archaeological excavations at the ancient Egyptian city of Tell Edfu, located on the West Bank of the Nile.

There is much about resilience to be learned from the ancient Egyptians, Moeller said.

“I think what makes today different from what we see with ancient societies is that the latter tried to find solutions, and it was at a scale where people could, through adaptation, find solutions,” she said. “Climate change was uncontrollable for ancient societies, but for us — since we know the causes of climate change — there’s certain actions we can take, such as lowering carbon emissions.”

“We can’t go on as we’ve always been going on,” Moeller added. “Societal change needs to happen.”

Climate change today, Moeller and Manning emphasized, is unprecedented in its rate of change. This suggests that it is largely human-made, a key difference from the natural processes that characterized climate change in antiquity. In addition, the human population during antiquity was also much smaller than it is in today’s world, as the planet is approaching carrying capacity.

But what both the ancient and contemporary cases have in common is the complexity of the effects of climate change and the response required by human society. Different areas of ancient Egypt faced different forms of climate challenges based on how they experienced the Nile floods. Responses to environmental stressors were varied and had far-reaching ripple effects.

“That’s why studying ancient climatic change is relevant for understanding what’s happening in our world now,” said Manning. “You can look at droughts in Old Kingdom Egypt and, say, the wildfires in modern California. Humans need water — if you don’t have water, you move. And that migration can lead to a lot of other changes.”

Studying climate history in ancient Egypt offers insight into what humans can do with often dramatic events like drought or temperature changes, the researchers said. Moral questions then arise.

“How will we respond around things like migration from Africa or Central America into the U.S. and Europe? How do we adjust expectations around things like economic growth?” said Manning. “What, as a society altogether, do we give up for the good of this planet?”

Written by Lynn Nguyen for YaleNews.