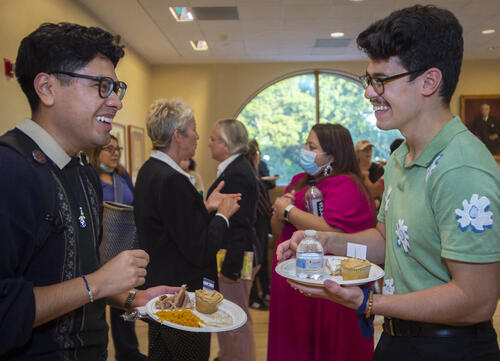 On September 15th, 2022, the Yale Alumni Association in collaboration with CLAIS, organized a movie screening as this year´s Hispanic Heritage Month kickoff. Showing the documentary OMARA, an homage to the beloved Cuban singer who formed an integral part of the Buena Vista Social Club, as the kickoff to the MacMillan Center and Yale’s celebration of Hispanic Heritage Month. After a beautiful evening dinner and reception, an introduction applauding Marta Elissa Moret’s work and contribution to the Yale community and beyond was given by Claudia Valeggia. Claudia gave background on Marta’s time at Yale and her accomplishments as president of Urban Policy Strategies, a New Haven based consulting group focusing on public health in traditionally underserved communities.

Moret and her colleagues spoke about the importance of bringing the Latine community together to bind successes and move forward as a group. Moret was able to cast a mood of Latine excellence and highlighted the struggles we face as well as the rewards that we may reap. Her address set the perfect tone for the film, which made clear the strife and struggle Omara faced in 1950’s Cuba as a daughter of a mixed-race marriage and later in life as a single mother. Director Hugo Perez also spoke about his experience at Yale and the silent films that set off his career in the industry. Beginning with VHS tapes and sneaking in to the singular film editing studios to work entire nights, Perez seemed destined to love and enjoy filmmaking and documentation. Through his work in OMARA, Perez shows us his artistic prowess: special cut scenes and panoramic shots of Cuba both in black and white and color brought life and motion to the audience when observing the past and current life of the famous singer.

After the viewing, Hugo Perez answered the audiences’ questions about the making of the movie, provided details about Omara’s life, described how it was to work with her and her family, and discussed his upcoming projects. The Q&A session ran until 9PM after the showing and brought the members of the Latine community together under the successes of Omara and Hugo Perez. Thank you for your attendance and participation in this celebration of Latin American peoples.