Live Webcast and Panel Discussion Will Examine the Chinese-U.S. Relationship 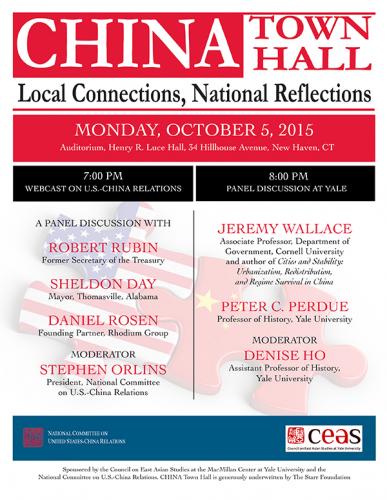 To help Americans better understand the complex U.S.-China relationship and the growing role of Chinese investment, Yale University’s Council on East Asian Studies and the National Committee on U.S.-China Relations are sponsoring a live webcast address on Monday, Oct. 5, featuring former Secretary of the Treasury Robert Rubin; Thomasville, Alabama Mayor Sheldon Day, whose city is the location of a major Chinese-owned factory; and Daniel Rosen, founding partner of the Rhodium Group. A panel discussion will follow the webcast.

Part of the ninth annual “CHINA Town Hall: Local Connections, National Reflections,” the event will begin with the webcast at 7 p.m. in the auditorium of Henry R. Luce Hall, 34 Hillhouse Avenue. It is free and open to the public.

Rubin’s address and a follow-up discussion will be webcast to audiences in more than 70 cities and towns across the United States, including in New Haven at Yale.  National Committee President Stephen Orlins will moderate the webcast, which will include questions submitted by the nationwide audience.

China has rapidly emerged as one of the fastest growing sources of foreign direct investment in the United States, bringing increasing numbers of Chinese companies into U.S. communities and providing jobs to tens of thousands of Americans, as described in the May 2015 report “New Neighbors: Chinese Investment in the United States by Congressional District,” released by the National Committee and the Rhodium Group. While foreign direct investment is a vital component of U.S. economic growth, employment, and competitiveness, media coverage of a few high profile Chinese investments has focused on security and economic risks.

The Council on East Asian Studies (CEAS) is headquartered in the Whitney and Betty MacMillan Center for International and Area Studies at Yale University. CEAS promotes education about East Asia both in the college curricula and through lectures and workshops, conferences, cultural events, and educational activities open to faculty, students, K-16 educators, and the general public. CEAS has been designated a National Resource Center for the study of East Asian languages and cultures by the U.S. Department of Education. The National Committee on U.S.-China Relations is the leading national, non-partisan public affairs organization devoted exclusively to building constructive and durable relationships between the United States and China.