A Message to the Yale MacMillan Team from Director Steven Wilkinson 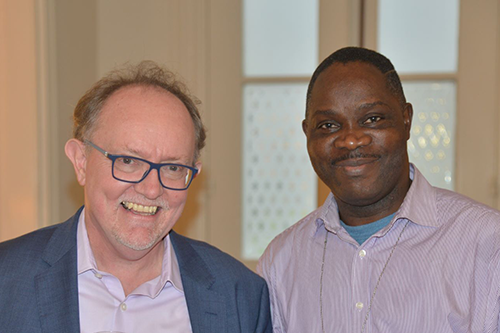 As the term comes to a close, I want to thank everyone on the MacMillan Center team for your hard work and celebrate some recent ways that you have deepened our understanding of the world. Here are a few highlights:

In September, African Studies partnered with the Yale University Art Gallery on the well-received “Bámigbóyè: A Master Sculptor of the Yorùbá Tradition” exhibit, which was called “long overdue” by the New York Times. Latin American & Iberian Studies hosted ‘The Road Ahead’ Brazil 100/200 conference, virtually connecting participants in São Paulo and New Haven to discuss how memory and culture, especially the arts, shape the meaning of independence for Brazilians today. Meanwhile, Y-RISE announced a new partnership with BRAC, the world’s largest NGO, “a world leader in developing and implementing cost-effective, evidence-based programs at scale, with a particular focus on communities in marginalized, extremely poor, or post-disaster settings.”

In October, South Asian Studies welcomed preeminent historian Ramachandra Guha, Distinguished University Professor at Krea University, for a series of four lectures, including the George Herbert Walker, Jr. Lecture and the Gandhi lecture. The same week, East Asian Studies celebrated the 30th Anniversary of Korean Language Study at Yale with a program that included award-winning author Min Jin Lee ’90, who reflected, among other topics, on her advocacy for Korean language study while a student.

Middle East Studies issued a statement in support of the Iranian protesters on Oct. 21 and has engaged on the subject of the protests throughout the semester. Similarly, European Studies has done much timely work on Russia’s war on Ukraine, including organizing Reading Ukraine: New Ukrainian Books Presentation Series, which featured conversations between acclaimed Ukranian writers and Yale professors.

In November, the Gilder Lehrman Center held a conference on “Teaching Race and Slavery in the American Classroom” which brought together participants from various fields and disciplines including academics, K-12 educators, and journalists.

As a team, we also managed a number of unexpected administrative transitions — in the Business Office and Director’s team, in addition to a number of program teams — and I sincerely appreciate how everyone pitched in to keep our ship on course. Thank you also for your extra efforts as we revamped our in-person events and travel schedules to pre-2020 levels.

A special congratulations to Joy Sherman and Kris Mooseker on their pending and recent retirements. We wish them all the best in the next chapter!

I hope you all have a great break, productive or relaxing as needed, with your loved ones.