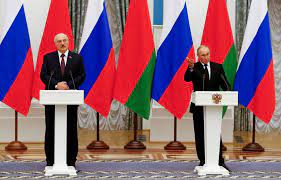 Last Thursday, Russian President Vladimir Putin and Belarusian President Alexander Lukashenko met in Moscow and agreed on more than two dozen programs for the Union State  the two countries created in 1999. The programs are aimed at increasing the integration of the two economies and, in so doing, providing a basis for some degree of supranational integration of the two states. Putin announced the programs would be approved the next day by the Union State Council of Ministers in Minsk and submitted for approval by the Supreme Council of the Union State later this year.

At the meeting of the Union State Council of Ministers, Russian Prime Minister Mikhail Mishustin and Belarusian Prime Minister Roman Golovchenko signed a formal resolution of the Council to implement the programs over the next two years and also signed a joint statement on the further steps to be taken to advance the integration process. The programs, 28 in all, aim to create a unified oil and gas market, develop common approaches to macroeconomic policies including monetary policy, taxation policy, transportation policy, industrial policy, agricultural policy, and customs rules and procedures. The aim at this point is to deepen the integration of the two economies, not political integration—at least not yet; as Putin put it in his comments after the meeting, “First the economic foundation must be laid before moving further on the political track.”

It was perhaps inevitable that, after the demise of the Soviet Union in 1991, there would be efforts to recreate, in part if not in whole, a union of the independent states that had once been part of the U.S.S.R. One such effort involved the decision by Russian President Boris Yeltsin and Lukashenko in 1996 to create the Community of Belarus and Russia. The link between the two states was increased when they signed a treaty in 1997 establishing a Union and another treaty in 1999 establishing a Union State. It may seem ironic, in retrospect, that it was the leader most responsible for the demise of the U.S.S.R.—the leader who, with those of Ukraine and Belarus, signed the Minsk Accord of December 1991 that declared the U.S.S.R. “has ceased to exist as a subject of international law and a geopolitical reality ”—who subsequently created the Union State of Belarus and Russia. But it must be remembered that, after declaring that the U.S.S.R. had ceased to exist as a territorial entity, Yeltsin and the other two leaders had invited the other former republics of the U.S.S.R. to join them in a new Commonwealth of Independent States. Although the new Commonwealth turned out to be ineffective, the impulse to put at least some of the pieces of the U.S.S.R. back together remained and one result was the Union State.

The initial Russia-Belarus Community had some largely-irrelevant supranational institutions—a council, an executive committee, a parliamentary assembly—but, more importantly, it committed the states to coordinating their economic and foreign policies. In the 1997 treaty establishing the Union and the 1999 treaty establishing the Union State, Yeltsin and Lukashenko created a union of the two countries, complete with a Supreme State Council, Council of Ministers, Union Parliament and other institutions, that would, in time, lead to the creation of a single economic area and market, a monetary union with a common currency, a common system of taxation, a common customs policy, a common defense procurement policy, and ultimately a common foreign and defense policy—and, eventually, an economic, political, and military union.

There were occasional, but short-lived, efforts to introduce common customs policies, create a common currency, and move toward greater economic integration that might lead to greater coordination of foreign and military policy and perhaps even some greater degree of political integration. But the enormous imbalance in size—Russia’s population is about 145 million compared to 9 million for Belarus—and in economic, political, and military resources, Lukashenko’s refusal to accept a lesser role commensurate with that imbalance for Belarus and himself, and Russia’s refusal to accept anything other than a union on its terms, has meant that, while a number of institutions have been created, relatively little has been achieved in terms of economic, monetary, and financial integration.

But recently, both countries have had renewed interest in implementing policies that would increase their economic, financial and monetary integration. Russia is still feeling the effects of the economic sanctions imposed on it after the invasion and annexation of Crimea—sanctions that had a significant and lasting contractionary effect on its GDP in 2015-16—as well as the more recent sanctions for the poisoning and imprisonment of Alexei Navalny. And Belarus has been experiencing sanctions imposed after its rigged presidential election last August and the subsequent crackdown on protesters and activists. It had to borrow $1.5 billion from Russia last September and, Putin announced last week, will borrow another $630 million this fall.

Last Friday, on the same day the Russian and Belarusian prime ministers signed the formal resolution implementing the Union State programs agreed the day before by Putin and Lukashenko, Zapad-2021, a week-long military exercise involving as many as 200,000 Russian and Belarusian troops with both conventional and strategic weapons, got underway in Belarus. The exercise takes place every four years and wasn’t a surprise; nevertheless, its scale alarmed both NATO and EU officials and, of course, the Polish and Baltic states’ governments. Lukashenko didn’t mince words about Zapad: “We effectively have a single army, with the Belarusian military forming its backbone in the western direction. If, God forbid, a war starts, the Belarusian army will be the first to engage in the fight, and the western group of Russia’s armed forces will join quickly thereafter to form a joint defense.” Jens Stoltenberg, the NATO Secretary-General, said, “Zapad fits into a broader pattern: a more assertive Russia, significantly increasing its military capabilities and its military presence near our borders.” Poland declared a state of emergency and Prime Minister Mateusz Morawiecki warned the exercise could result in “provocations.” The primary concern of NATO military officials is that, as occurred in Russia’s military exercise in the spring with 100,000 troops in territory near Ukraine, significant numbers of troops and/or equipment may remain in place after the exercise ends – in effect, forward positioned in advance for possible future use.

The Zapad-2021 exercise will conclude this Friday, which coincidentally (or perhaps not coincidentally) is the first of three days during which Russians will go to the polls to elect a new Duma. (Initially scheduled for September 19, because of the Covid pandemic the Electoral Commission extended the election over three days, from Friday through Sunday.) Similar to the German mixed-member electoral system, 225 of the 450 seats in the Duma are filled on a first-past-the-post basis in single-member legislative constituencies, and the other 225 seats are filled on the basis of the share of the total party list vote obtained by the parties winning more than five percent of the national party list vote.

When the votes are counted early next week, United Russia will undoubtedly retain its substantial majority in the Duma, no doubt boosted by the combined effect of the recent agreement in regard to creating the Union State with Belarus and, above all, the Zapad-2021 exercise. Nevertheless, several recent polls suggest there is some collective dissatisfaction with the continued United Russia hegemony. Four polls released over the past week estimated that United Russia would receive 41-46 percent of the vote, roughly 10 percentage points less than what it received in the party list vote five years ago. In contrast, the polls suggest the Communist Party may obtain 17-19 percent, an increase of 4-5 percentage points over what it received in 2016. The polls also suggest that three smaller parties may also do relatively well: Just Russia, which got about 6 percent of the party list vote in 2016, may get 7-9 percent; a new party calling itself New People, may get 5-6 percent of the vote; and the Pensioners party, which got less than 2 percent in 2016, may get 3-5 percent of the vote. The misnamed-Liberal Democrats headed by Vladimir Zhirinovsky may obtain 11-13 percent of the vote, roughly what they received in 2016. Russian polls have to be taken with several grains of salt. Nevertheless, they suggest United Russia’s vote may drop off a bit and those of the Communists, Just Russia, the New Party, and the Pensioners may pick up some votes and seats. But at the end of the day, United Russia will  in all likelihood still have a very substantial majority in the Duma.

Nevertheless, based on these polls, it is quite possible that, even if United Russia retains its substantial majority in the Duma, its share of the vote may drop off. If that happens, it may well be at least in part because there has been some erosion in the extent of popular support for Putin and the Russian government. The Levada Center has asked Russians periodically over the years, ”Do you approve the activities of V. Putin as the President of Russia?” In the wake of the annexation of Crimea in 2014, the proportion saying they approved of his activities as President soared to more than 80 percent and it remained at that level at the time of the 2016 election. But since then, the proportion saying they approve of his activities as President has dropped; in the most recent survey, taken in August, 61 percent said they approve of his activities and 37 percent said they disapprove. And when asked if they approve of the activities of the government, more people said they disapproved than said they approved.

In retrospect, both United Russia and Putin experienced a quite substantial bounce in support in the wake of the Crimean annexation that contributed to United Russia’s substantial victory in the 2016 Duma election. But that has evidently worn off to some extent over the past five years, and we’re likely to see the effect of that in this weekend’s election, notwithstanding whatever benefit may be derived from the progress in creating the Union State with Belarus and, especially, from the large-scale Zapad exercise.