Understanding digital Vietnam: Disentangling Vietnam as a techno-social plurality in the making 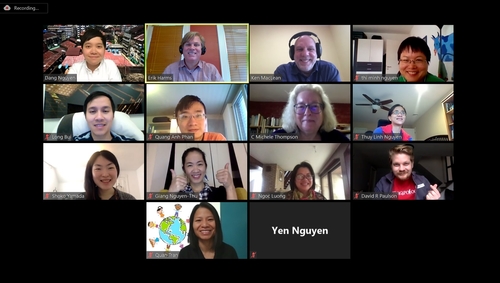 On May 1, the Council on Southeast Asia Studies and the Fox International Fellowship co-hosted an online workshop to facilitate a scholarly forum for researchers of digital Vietnam to share their work and discuss the shifting nature of mediated sociality and modernity in Vietnam.

The workshop was originally scheduled to take place on April 3 at Yale University. However, this plan was disrupted by public health measures in Connecticut and throughout the U.S. that were put in place to slow down the spread of COVID-19. Unfazed by these disruptions, the workshop organizers quickly worked to move the workshop online to allow for remote participation. Presenters created short videos summarizing their papers prior to the workshop; workshop papers were circulated among participants prior to workshop discussion. A recording of the workshop discussion via Zoom was also made available on the workshop website.

Vietnam, much like the rest of Southeast Asia, is currently undergoing radical social transformations as digital technologies have become entwined in the way people connect and relate to each other. Rapidly growing internet penetration and mobile technology adoption mean that people are increasingly performing significant parts of their everyday lives online; at the same time, digital technologies and their affordances are reshaping the possibilities of constructing contemporary Vietnam. Such techno-social processes often produce new forms of subjectivities, while also carrying material effects that shape patterns of social norms at the individual, group, and societal levels. These techno-social transformations raise questions about how to conceptualize and respond to social issues in a country where nearly half of its 96 million people are under the age of 25 and whose enthusiastic embrace of digital technologies often hinges on the discourse of globalisation (toàn cầu hoá), modernisation (hiện đại hoá), integration (hoà nhập), and development (phát triển).

Discussions opened on Friday with a paper by Long Bui (UC Irvine), which sought to think through the different binary categories by which Vietnamese Americans traveling back to Vietnam are interpellated. The paper highlights how social media platforms like Facebook are pivotal to the migration, tourism, and exile of Vietnamese returnees. In the stimulating discussion that followed, participants dissected how the formation of digital Vietnam intersects with a diasporic Vietnam and a post-socialist Vietnam.

Giang Nguyen-Thu (University of Pennsylvania) continued the discussion with her study of digital motherhood, which examined how historically gendered categories such as care and precarity are interfacing with digital technologies in novel ways in Vietnam. Dang Nguyen (Yale) contributed to the workshop discussion with a paper that used computational methods and network theories to describe the ways in which traditional medical knowledges in Vietnam are propagating on social media. The paper calls into question the commonly held idea that the internet is democratising flows of ideas, and instead argues that some existing social orders and boundaries in Vietnam are replicating themselves online. The workshop ended with a paper by Professor Erik Harms (Yale), in which he fleshed out his theory of ‘cartographic action’ through a careful study of the case of the missing urban development maps in Vietnam in 2018. Workshop discussants, Professor Erik Harms (Yale) and Professor Ken McLean (Clark University), moderated the stimulating discussions and provided insightful feedback to each individual paper.

In a generative and congenial discussion that concluded the workshop, participants dialling in from Connecticut, New Jersey, New York, Massachusetts, California, Singapore, Australia, and Germany contributed ideas on emerging themes and new directions for future research into digital Vietnam. These themes and directions, together with publications and future collaborations resulting from this workshop, can also be found on the workshop website. (https://seasia.yale.edu/understanding-digital-vietnam)