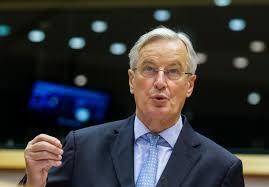 On Sunday morning, after the EU and UK had made some progress in resolving one of the most difficult issues in the negotiation of their future relationship—how to maintain a level playing field for British and EU businesses competing with each other after the UK leaves the EU’s internal market and customs union at midnight on December 31—European Commission President Ursula von der Leyen and British Prime Minister Boris Johnson agreed in a phone call that, despite the exhaustion after many months of negotiation and the fact that deadlines have been missed time and again, “it is responsible at this point to go the extra mile. We have accordingly mandated our negotiators to continue the talks and to see whether an agreement can even at this late stage be reached.”

The negotiation continued this week in Brussels. But time is obviously running out; if an agreement about the future relationship is to take effect at midnight on December 31, it will have to be concluded, reviewed and approved not only by the EU and UK governments but also by the European and British parliaments. And the European Parliament cannot do that without a text that has passed muster with the lawyers, been translated into at least some of the EU’s 24 official languages and been scrutinized and approved by the European and the British parliaments. The European Parliament, in particular, has been increasingly anxious that it may not have sufficient time to review with care a treaty that will be hundreds of pages in length. Indeed, in a meeting yesterday between Michel Barnier, the EU’s chief negotiator, and the leaders of the party groups in the European Parliament, one of the most important leaders, Manfred Weber of the center-right European People’s Party, suggested today should be the deadline for reaching an agreement. Barnier said he could pass that along to the British negotiators but suggested, given the difficulty in reaching an agreement in regard to the future access of EU fishermen and women to British water, that the deadline be extended to the end of the weekend. Subsequently, the Conference of Presidents of the Parliament’s political groups issued a statement in which it said it “stands ready to organize an extraordinary plenary session towards the end of December, in case an agreement is reached by midnight on Sunday 20th December, for the European Parliament to debate the outcome of negotiations and consider granting its consent.”

The British government, of course, has little interest in providing time for extensive parliamentary scrutiny of an agreement in the event one is concluded since, resting as it does on a substantial majority in the House of Commons and knowing that the clock steadily ticking toward midnight on December 31, it knows the House will approve whatever legislation it proposes in regard to the future relationship with the EU. Nevertheless, Jacob Rees-Mogg, the Leader of the House of Commons, reportedly told colleagues that parliamentary officials had assured him that if, as the European Parliament party leaders initially suggested, an agreement were to be concluded, at the latest, by the end of business today, the Parliament, which began its Christmas recess yesterday, could be recalled Monday, the Commons could complete all of the stages in the legislative process and approve a “future relationship bill” that same day, the House of Lords could approve the bill without amendment on Tuesday, and the act could receive the Royal Assent on Wednesday. Presumably, reaching an agreement by midnight on Sunday rather than by the end of business today, as European Parliament’s Conference of Presidents agreed yesterday, will push Rees-Mogg’s three-day timetable to the week after Christmas – a week that, of course, will culminate on Thursday, December 31.

In a speech at Wednesday’s plenary session of the European Parliament, von der Leyen provided the MEPs with a brief update on the EU-UK negotiation. After thanking Barnier for his dedication and resilience, she said, “As things stand, I cannot tell you whether there will be a deal or not, but I can tell you that there is a path to an agreement now. The path may be very narrow but it is there and it is therefore our responsibility to continue trying. The good news is that we have found a way forward on most issues, but this is now a case of us being so close and yet so far away from each other. Because two issue still remain outstanding, you know them: the level playing field and fisheries. Speaking of the first, she said the EU and UK have made progress on the issue of state subsidies, agreeing on common principles, guarantees of domestic enforcement and autonomous remedies. And on regulatory standards, the EU and UK have agreed on a strong mechanism of non-regression—i.e.., rolling back standards to create a competitive advantage. She also noted the negotiators have largely resolved the issues lined to the governance of the agreement. But on fisheries, she said the discussion is still “very difficult. We do not question the UK’s sovereignty over its own waters, but we ask for predictability and stability for our fishermen and fisherwomen. And in all honesty, it sometimes feels like we will not be able to resolve this question. But we must continue to try and find a solution. And this is the only responsible and right course of action.”

The fisheries issue is all about the extent of access by EU fishermen and women to British territorial waters, the length of any transition period from the current situation under  the Common Fisheries Policy, which will no longer apply after 2020, and the British and EU shares of the catch in British waters after 2020. President Emmanuel Macron, already anxious about the 2022 presidential election, has led a group of EU coastal states that includes Belgium, the Netherlands, Denmark and others that are insisting on continued full access to British waters for up to a decade after 2020, continued access to the 6-12 nautical mile zone of British coastal waters and the right to retain roughly 80 percent of the current annual catch by EU fishermen and women in British waters. The UK insists on a much shorter transition period, permanent exclusion of EU fishermen and women from the 6-12 nautical mile UK coastal zone and “repatriation” of 60 percent of the EU’s total catch in terms of value.

Last evening, von der Leyen and Johnson spoke again to take stock of the on-going negotiation. After the phone call, von der Leyen issued a statement in which she said “We welcomed substantial progress on many issues. However, big differences remain to be bridged, in particular on fisheries. Bridging them will be very challenging. Negotiations will continue tomorrow.” Johnson’s office likewise issued a statement. In it, it said, “The Prime Minister underlined that the negotiations were now in a serious situation. Time was very short and it now looked very likely that agreement would not be reached unless the EU position changed substantially. He said that we were making every effort to accommodate reasonable EU requests on the level playing field, but even though the gap had narrowed some fundamental areas remained difficult. On fisheries he stressed that the UK could not accept a situation where it was the only sovereign country in the world not to be able to control access to its own waters for an extended period and to be faced with fisheries quotas which hugely disadvantaged its own industry. The EU’s position in this area was simply not reasonable and if there was to be an agreement it needed to shift significantly. The Prime Minister repeated that little time was left. He said that, if no agreement could be reached, the UK and the EU would part as friends, with the UK trading with the EU on Australian-style terms. The leaders agreed to remain in close contact.”

Speaking today to the European Parliament, Barnier said, “It’s a question of whether the UK will leave in a few days—10 days or so—if they’re going to leave the single market and customs union with an agreement or without an agreement. It’s the moment of truth. We have very little time remaining, just a few hours to work through these negotiations in a useful fashion if you want this agreement to enter into force on 1 January.” Focusing specifically on the issue on which the success or failure of the negotiation now depends—continued access for EU fishermen and women to British waters—Barnier said, “When it comes to access to markets without tariffs and quotas and the UK would like to regain its sovereignty over fisheries, to be able to control access to its waters and, as I’ve said on many occasions, I’ll reiterate that here: we can accept that and we respect that. But if following a critical period of adjustment that is deemed necessary, if the UK then wants to cut access to these waters for European fishermen, at any given time, then the European Union also has to maintain its sovereign right to react or to compensate by adjusting the conditions for products, and especially fisheries products to the single market. And that is where we come up against one of the main hurdles of the negotiations at the moment, fisheries being part and parcel of the economic partnership.” And speaking in part, no doubt, from his former experience as a French minister of agriculture and fisheries, he said, “I don’t think it would be fair, not acceptable, if European fishermen were not allowed, following transitional rights, to have access to those waters when the rest of the agreement, especially applying to companies from the UK, would remain stable in their rights, so that wouldn’t be fair, that wouldn’t be honest.”

Over the past week, the negotiators have made substantial progress in resolving what is, for the EU, undoubtedly the most important unresolved issue—how to maintain a level playing field between EU and British firms in regard to rules and regulations pertaining to state subsidies and labor, health and environmental standards. Both teams are now working on the details of a “rebalancing” mechanism that would include a procedure for either side to raise an issue in regard to a change by the other side in a rule or standard that gives the latter a competitive advantage, a methodology for measuring the impact, in terms of competitiveness, of the change, and a procedure through which the “imbalance” could be repaired prior to resorting to tariffs. There are still, as Johnson said last night, some fundamental differences between the sides in regard to the procedure, methodology and “rebalancing” mechanism that have to be resolved. But importantly, the EU and UK agree on the essential parameters of the mechanism.

But the same cannot be said for fishing. As astounding as it may seem, it is quite possible the EU and UK will fail to conclude an agreement because of their differences in regard to a sector that accounts for about 0.1 percent of the British GDP and 1 percent of the EU GDP. But then, for politicians such as Johnson and Macron, the fishing issue isn’t about fishing; it’s about politics—defending the port towns and villages that rely on fishing and the men and women who work—and often risk their lives—in fishing.

Time is running out. It is, as Barnier told the European Parliament today, “the moment of truth.”