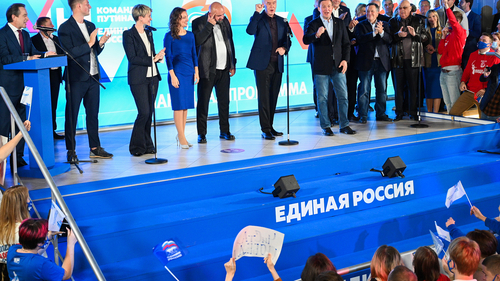 On Friday, Russian voters went to the polls in the first of three days of voting to elect a new State Duma, the lower chamber of the Russian Federal Assembly. The election, conducted over three days to allow more social distancing in the polling stations, concluded yesterday, and when the votes were counted, United Russia, President Vladimir Putin’s party, retained its substantial majority in the Duma. Nevertheless, despite a considerable effort by the regime to prevent its opponents—most notably, those associated with the organizations led by Alexei Navalny—from participating either by jailing them or forcing them to leave the country, by forcing Google and Apple to remove access to the Navalny organizations’ “Smart Voting” app that provided advice regarding the best-situated opponents of United Russia, and by deploying flagrant and widespread ballot stuffing and extensive fraud, United Russia experienced a modest setback both in its share of the party list vote and the number of constituency seats it won.

The Russian electoral system is, like that of Germany and several other countries, a mixed-member system. Voters are given a ballot and asked to vote both for someone to represent their legislative constituency and for a party list. 225 of the 450 seats in the Duma are filled by those who defeat the other candidates on a first-past-the-post basis in 225 single-member legislative constituencies. The other 225 seats are filled on the basis of the share of the total party list vote in the constituency obtained by the parties that win more than five percent of the national party list vote.

To the extent there was any winner (other than United Russia in retaining its substantial majority) in the election, it was the Communist Party of the Russian Federation (CPRF) headed by Gennady Zyuganov. In 2016, the CPRF won seven constituency seats, 13.3 percent of the party list vote and 35 party list seats, giving it a total of 42 seats in the Duma. Clearly drawing support from those adversely affected by rising prices for food and other daily necessities and the year-long drop in Gross Domestic Product from the second quarter of 2020 through the first quarter of this year, the CPRF increased its share of the party list vote to 19 percent, an increase of 5.7 percent, that enabled it to pick up 48 party list seats to accompany the nine it won in constituencies, giving it a total of 57 seats in the Duma, a gain of 15.

And to the extent there was a loser (other than United Russia) in terms of share of the party list vote, it was the Liberal Democratic Party of Russia (which is not, in fact, a liberal democratic party but, rather, a right-wing nationalist party) headed by Vladimir Zhirinovsky. In 2016, the LDPR won five constituency seats, 13.1 percent of the party list vote, and 34 party list seats, giving it a total of 39 seats in the Duma. But it’s very hard for a relic from the Yeltsin era to win on a nationalist platform against Putin and United Russia, and in the election that concluded yesterday, the LDPR saw its share of the party list vote drop from 13.1 percent in 2016 to 7.5 percent, a drop of 5.6 percent that resulted in it winning, in addition to two constituency seats (a loss of three), 19 party list seats (a loss of 15), giving it a total of 21 seats in the Duma, a loss of 18.

Among the other parties running in the election, only two surpassed the five percent threshold making them eligible for party list votes. Just Russia, a left-of-center but pro-Kremlin party led by Sergey Mironov, won eight constituency seats, a gain of one compared with 2016, and 7.4 percent of the party list vote, an increase of 1.2 percent, and 19 party list seats, a gain of three, giving it a total of 27 seats in the Duma, a gain of four. The other party that crossed the five percent threshold was a new center-right and liberal party, New People, founded last year and led by Alexey Nechayev, the head of a cosmetics company. The party didn’t win any constituency seats but it won 5.3 percent of the party list vote and 13 party list seats. Three constituency seats were won by candidates of three small parties, compared with two in 2016, and five were won by independents, compared with one in 2016.

With United Russia now thoroughly entrenched in power for the next five years, attention will now inevitably turn to the 2024 presidential election. Putin, who was Prime Minister under President Boris Yeltsin in the late 1990s and became Acting President when Yeltsin resigned on December 31, 1999, was elected to two four-year terms as President in 2000 and 2004 and then, after arranging for Medvedev to succeed him for one term in 2008 while he became Prime Minister, was elected, after a constitutional amendment extending the term, to two six-year terms in 2012 and 2018, will be eligible, thanks to another constitutional amendment approved last year, to run for reelection to another six-year term in 2024 and, if he wishes, again in 2030.