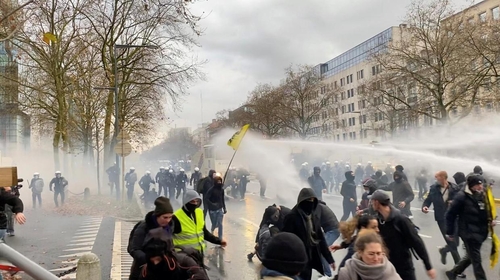 In Rotterdam, The Hague, Brussels, Vienna, Zagreb and other cities across the EU, protesters were out in force this past weekend expressing their opposition to the new measures, ranging from partial lockdowns to vaccine mandates, their governments had proposed or introduced to reverse the dramatic surge in coronavirus infections that has occurred since early October. And as images of police trucks using water cannons and tear gas to drive back and disperse the protesters circulated around the world, it was evident to all that the Covid pandemic has not only inflicted immense suffering and loss on millions of Europeans but has also damaged the legitimacy of many European governments that believe the way to respond to protests is to use water cannons.

The member states of the EU have made fairly good progress in recent months in vaccinating their citizens against the Covid virus. As of today, 67 percent of the EU population is fully vaccinated. That compares with 58 percent of the U.S. population. But the EU nevertheless not only has a stubbornly high rate of daily infection but one that has been increasing dramatically in many of the member states over the past two months. In order to control for both day-to-day fluctuations in the number of new cases and for the large differences in the size of the populations of the various countries, those who study Covid comparatively use measures that typically are based on a seven-day or fourteen-day rolling average of cases per 100,000 or one million population. The data on Covid infections collected by the EU’s European Centre for Disease Prevention and Control (ECDC) and reported by the ECDC and the Oxford-based Our World in Data project indicate that, as of yesterday, the daily rate of new cases per 100,000 over the past seven days in the EU (51.4) was nearly twice that of the U.S. (28.6). That means that, controlling for the difference in population, the rate of new infection in the EU in the past week was 80 percent greater than the rate in the U.S.

The prolonged surge in the rate of daily infections over the past two months not surprisingly led many of the governments to consider a variety of possible measures to slow, and hopefully reverse, the surge in infections, which of course could be expected, notwithstanding the availability of booster shots for those already vaccinated, to result in subsequent surges in hospitalizations and deaths.

On November 12, Dutch Prime Minister Mark Rutte announced three weeks of restrictions, starting the following day, that included closing non-essential shops at 6 p.m. and supermarkets, bars, cafes, restaurants, and hotels at 8 p.m. and prohibiting the attendance of spectators at sporting events. The government also announced plans to limit its national corona pass, which is required for entry to bars and restaurants, to those who are vaccinated or have recovered from Covid. Those who remain unvaccinated would no longer be admitted just with evidence of a negative test. In addition, the government announced it would prohibit fireworks on New Year’s Eve in order to avoid using space in hospitals for the victims of such fireworks rather than patients with Covid. Rutte’s announcement prompted a demonstration in The Hague in which, after the protesters threw stones at the police, the police brought in trucks with water cannons to drive back and disperse the protesters. And last weekend, there were three nights of demonstrations against the measures, most notably in Rotterdam on Friday night and in Amsterdam and The Hague on Saturday night, as well as in cities and towns throughout the country. In the Rotterdam and Amsterdam demonstrations, the protesters threw stones at the police and the police fired on the protesters, wounding several, and used water cannons and tear gas to drive back and disperse the protesters.  Demonstrations also took place in other cities throughout the country.

On November 13, the Austrian government ordered a national lockdown for those who were still unvaccinated. Already barred from restaurants, bars, theaters and non-essential shops, as of the following Monday, those who were unvaccinated were allowed to leave their homes only to work, get groceries, and exercise. Compliance with the order would be checked by the police. In addition, the government announced its intention to make vaccination mandatory for all in the near future. And last Friday, after meeting with the governors of Austria’s nine states, Chancellor Alexander Schallenberg announced a full national lockdown starting yesterday for a maximum of 20 days, during which Austrians would be asked to work from home if possible and all non-essential shops would be closed. The measures would be reassessed in ten days and would remain in effect until mid-December. In addition, he announced that legislation would be prepared that would require all those who are unvaccinated to be vaccinated by February 1: “We don’t want a fifth wave, “he said, noting that too many people had refused to get vaccinated because of “too many political forces, flimsy vaccination opponents and fake news.” Not surprisingly, the measures, the most far-reaching measures introduced thus far in response to the surging rate of infections, coupled with the planned vaccine mandate, prompted large demonstrations in Vienna, Salzburg and other cities.

Last week, the Belgian government likewise introduced a series of measures designed to address the dramatic surge in Covid infections since early October. While falling short of the measures deployed in Austria and the Netherlands, the government did advise those who aren’t vaccinated to get vaccinated, required those who can work at home to do so at least four days a week until mid-December, tightened rules of using face masks, including in restaurants and bars where Covid passes are already required for entry, prepared to make vaccination mandatory for healthcare workers, and contemplated a wider vaccine mandate. The result, predictably, was a large demonstration in Brussels on Sunday, like those that had taken place in the Netherlands, in which protesters marched through the city, set fires and threw stones at the police who, predictably, responded with water cannons and tear gas in an effort to push the demonstrators back and disperse them.

Elsewhere, governments have responded to the surge in various ways, drawing upon some of the measures adopted by Austria, the Netherlands, Belgium and other countries. Particular attention now is focused on Germany, where the state of Bavaria has instituted a de facto lockdown for the unvaccinated. But in the meantime, there is one simple lesson that emerges from the situation in the EU today in regard to Covid. It is the message conveyed by the scatterplot described earlier. Governments that want to stop the surge and substantially reduce the rate of infection need to do one thing above all else – increase the rate of vaccination to at least 80 percent of the population. If that is done, the surge will be reversed and the country will begin to get through the pandemic.

David R. Cameron is a professor emeritus of political science and the former director of the MacMillan Center’s Program in European Union Studies