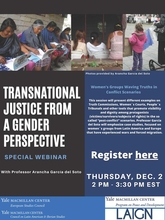 Women’s Groups Waving Truths in Conflict Scenarios
DESCRIPTION:
This session will present different examples on Truth Commissions, Women´s Courts, People´s Tribunals and other tools that promote visibility and dignity among protagonists (victims/survivors/subjects of rights) in the so called “post-conflict” scenarios. There is a strong emphasis on case studies, basically focused on women´s groups from Latin America and Europe that have experienced wars and forced migration (Colombia, Guatemala, Balkans and Migrants in Greece). The main approach in the presentation is applied knowledge based on gender, generational, ethnic and community perspectives.
BIO:
Professor Arancha Garcia del Soto, has worked with victims of war and structural violence since 1993 (Balkans). She is currently accompanying Human Right Defenders in Honduras and Colombia providing them with online psychosocial support, and collaborating with EQUITAS, Colombia (forensic work and support to the families of the disappeared), and with UNATE Cantabria, Spain (The Permanent University for Senior People). Until December 2019 she was working for the Colombian Truth Commission, within its Exile Team, coordinating the work with the Colombian victims/survivors in Europe and the US, under the supervision of Carlos M. Beristain.

She taught and worked in 2006-2009 at the Institute of International Humanitarian Affairs (IIHA) of Fordham University in New York City. Previously, she was the Director of Refugee Initiatives, at the Solomon Asch Center for the Study of Ethnopolitical Conflict, of the University of Pennsylvania, in Philadelphia (2002-2006). In the Fall Semester of 2012, she held the position of “Global Peace Leader” at Haverford College, PA, and she has been holding workshops at this Campus once yearly since then.

She has taught and practiced international human rights work in Europe, Colombia, Africa, Sri Lanka, and Mediterranean countries with migrants, refugees and IDPs, mostly implementing protection and psychosocial projects for conflicts´ victims. In 2011 she came back to Asturias, Spain where she is currently based after spending 9 years working overseas, with base in the US.

A Doctor Member of the Center for the Advanced Studies of the Social Sciences, CEACS, at the Juan March Foundation in Madrid, Spain, she teaches short courses to graduates in Masters, and mentors Ph.D. work on Humanitarian work and Migration in different continents. She holds a degree in Social Psychology by the University Pontificia de Salamanca in Spain. A Masters in Social Sciences by the CEACS (Center for Advanced Social Studies) at the Juan March Foundation in Madrid, and a Ph.D. in Sociology at the University of Salamanca (awarded with the “Premio Extraordinario” and “Premio Nicolas Pérez Serrano del Centro de Estudios Constitucionales”). She supports research, training, and applied work on (1) Community well-being, (2) Gender and SGBV- Sexual Gender based Violence, (3) Generational and Cultural approaches, and (4) Migrant and Refugee Women’s Networks. Her main interests are applied knowledge in gender and generational differences, and the community and do-no-harm approaches when working with protagonists (victims/survivors/ rights holders) in conflict and post-conflict contexts.

She has implemented work on trauma, collective and individual harm assessments for trials on Gender Based Violence, psychosocial support of witnesses and victims, mapping of Internally Displaced Persons, and design of quantitative and qualitative tools to deepen on the impacts of violence.