Celebrating the diversity of student approaches to African Studies 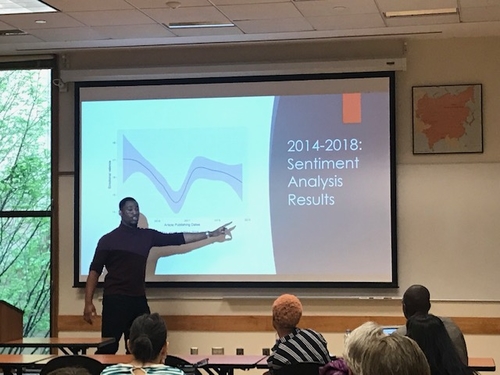 Faculty, students, and members of the greater Yale and New Haven community came together on April 30 to celebrate the Council on African Studies second annual African Studies Symposium. Comprised of four sessions entitled “Perspectives on History and Law,” “Science and Technology: New Approaches to Challenging Questions,” “Gendered Experiences of Care and Violence,” and “Perceptions and Representations: Fashioning the Self and the State,” the thirteen presentations showed the richness and diversity of approaches to how Yale undergraduate, graduate and professional students, and visiting fellows study the continent.

In One Man’s Fish, Another Man’s Profit; Combating International Overexploitation of African Fisheries through the African Charter, second year law school student Dianne Lake wondered, “How is it that Africa is the only region in the world where fish consumption rates are declining?”, considering that many African states are known to be rich in marine sources. Lake explained how fishing companies from Europe and Asia have been plundering African waters through exploitative fishing agreements that are legally sanctioned by the United Nations Convention on the Law of the Sea. She argued that UNCLOS has enabled the economic exploitation of the marine resources of African States at a devastating human and environmental cost and proposed an innovative Africa-centric solution to the foreign overfishing crisis in Africa through the African Charter, which protects local rights to adequate food, and the right to benefit from natural resources.

History major Malaika Aryee-Boi presented her senior thesis, The Missionary Encounter in the Gold Coast: 1850-1933: Rethinking Slave Narratives. She looked at slave narratives in Ghana as told through German missionaries and noted the challenges of working with archives and trying to find voices that were erased or not recorded. As Aryee-Boi noted, “I was trying to get at the slave experience through ‘reading against’ the German missionary text,” which doesn’t give African voices an unfiltered representation. In this way she hoped to deconstruct and re-think these narratives as a way of reclaiming those voices.

Joint FES and Global Affairs Master’s student Emily Sigman shared just how complex ecological restoration is in her presentation The Role of Community Labor in Socio-Ecological Restoration: Perspectives from Abreha we Atsbeha. Through a program known as the Free Labor Contribution Period (FLCP), a community in Northern Ethiopia has employed a land management approach known as Integrated Watershed Management which has restored vegetation and water flows and transformed the region in 20 years from being food-aid dependent to boasting a high degree of food sovereignty. When Sigman began her research she understood that success was due to the community members freely giving their time to the restoration project. Over the course of her study she came to realize that within these local communities a somewhat autocratic system controlled this restoration, leaving her to ask, “How can you scale something in other regions based on this kind of social pressure?”

Other presentations featured seniors Resla Wesonga, Ademide Ajayi, Brent Mertz, Aaliyah Ibrahim, and Rahim Haliminski whose wide-ranging studies introduced the audience to nation branding in Rwanda; using ‘Natural Language Processing’ to understand public opinion about the Nigerian president; the co-existence of traditional healing alongside western medicine with treatment-seeking behavior for malaria in Tanzania; social movements activists as actors in conflict settings using Boko Haram as a case study; and decolonizing the African refugee identity. The work of PhD candidates Kristen McLean and Constantine Manda shined a spotlight on young fathers in Sierra Leone as caregivers who contributed to family health and wellbeing during the West African Ebola epidemic, and how violence perpetrated by members of a larger group affects the political attitudes of a smaller subset of that group and their desire to remain as part of the larger entity, particularly Tanzanian support for the proposed East African Federation. Fox International Fellows Charlotte O. Kwakye-Nuako and Ingrid Hali Tokun Haga Alvarez shared their research on the experiences of victims of child abuse and their caregivers as they navigate the Ghanaian legal system and the role of women in carrying out the Rwandan genocide.

The work presented generated lively questions and observations throughout the day-long event. During McLean’s session one audience member commented that it was the first time in an academic talk that he’d heard young men discussed in a positive light as care-givers noting that the emphasis is usually on them as perpetrators of violence. McLean noted that less scholarship has been focused on men’s roles as care-givers or co-parents, particularly in the context of governments restrictions or crisis, and this gap was a motivation for her research. Presenters and audience members continued their conversations during the reception which followed the symposium.